Peanut butter got its start a long time ago

November is National Peanut Butter Lovers Month. Are you a fan? If your kids are, research shows they will eat 1,500 peanut butter and jelly sandwiches before they graduate high school. In fact, people eat so much peanut butter each year, a line of 18-ounce jars would wrap around the Earth one and a third times.

The history of peanut butter begins with, of course, peanuts, which are not nuts, but legumes, like peas and beans. It got its name because of the hard, nut-like shell and pea-like appearance.

Peanuts originated in Bolivia and grew in the countries of Peru and Brazil, as well as on islands in the Caribbean. Spanish and Portuguese explorers took them to Europe, Asia and Africa.

Peanuts were eaten by slaves on the ships that brought them to North America. They planted them in their small gardens around their quarters. Most of the time, peanuts were used as food for pigs, cows and other livestock, but the slaves also ate peanuts raw, roasted or boiled.

Slaves were often the household cooks for plantation owners, and they added peanuts to meals. That made peanuts a popular food ingredient throughout the southern United States. During the Civil War, peanuts were consumed to prevent starvation. Union soldiers brought them home to the North after the war, where they became a popular snack food.

The first person to make peanut butter popular was John Harvey Kellogg. He was a vegetarian, and in the early 1890s, he invented a way to crush nuts between two rollers to make nut butters as a substitute for cow’s butter and cream. Kellogg was the director of a sanitarium in Battle Creek, Mich., and gave his peanut butter to some of the rich patients there.

Officially, peanut butter was introduced to the public at the 1904 World’s Fair in St. Louis, Mo., by a man named C. H. Sumner. He sold $705.11 worth of peanut butter at his stand. In the early 1900s, peanut butter was considered a fancy ingredient. It was served at elegant dinners, andin tearooms and restaurants.

Peanut butter sandwiches were also popular by 1900. People would make them with all kinds of ingredients inside, including: jelly, raisins, marmalade, cheese, cucumbers, grapefruit, celery, apricots, dates, bananas and bacon.

As more companies began making peanut butter, it became less and less fancy. With the invention by Gustav Papendick of a machine that could slice and package bread in the 1920s, peanut butter sandwiches became a hit with kids since they could then make their own without using a sharp knife.

Celebrate Peanut Butter Lovers Month with your kids by making your own. Just wiz-up the ingredients in a food processor and the kids will be amazed. Then you can use the peanut butter to make kid-friendly granola bars. 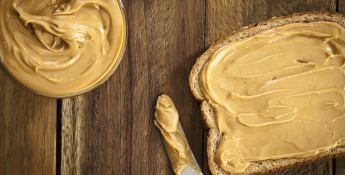 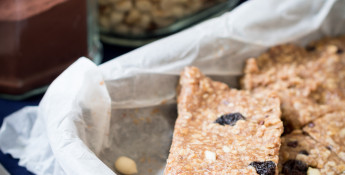