Cattle and conservation mix at the Flying W in Chase County

Somewhere between St. Louis’ Gateway Arch and the eastern edge of the Rockies, the West begins. William Least Heat-Moon’s best-seller “PrairyErth” drew the line at Chase County, noting that’s where a California-bound traveler on U.S. Highway 50 would believe they’ve arrived at the edge of the American West.

While its history isn’t as colorful as cow towns like Abilene and Dodge City with their assortment of cowboys, outlaws and lawmen, the shallow, rocky soil of the Flint Hills saved the prairie from the plow and preserved Chase County’s Western credentials.

Cattle are as prevalent there today as they were when it was the country’s frontier, accounting for nearly $73 million in economic activity during 2020. Ranching is responsible for employing nearly 10 percent of the 2,500 people living there. 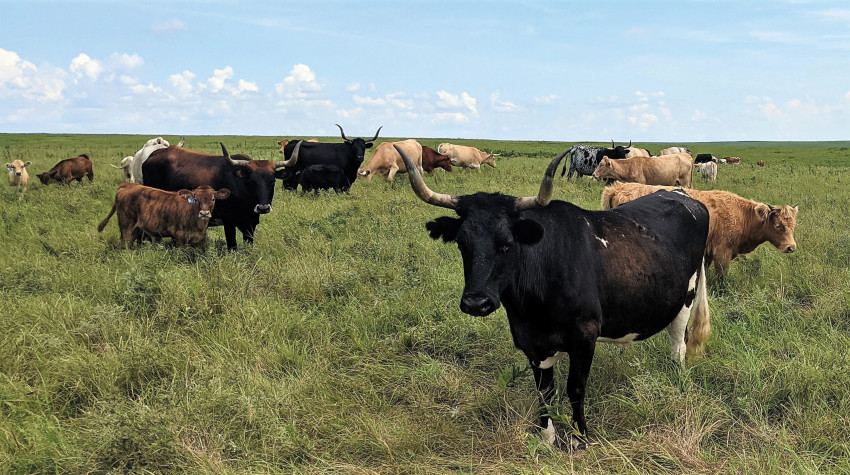 One of those is Josh Hoy, who formed the Flying W ranch in 1996 with his cousin, Warren Kruse. Hoy, who grew up near Cassoday, is a fifth-generation Flint Hills rancher, but he spent plenty of time farther west before putting his roots down in Chase County with his wife, Gwen, and daughter, Josie.

“Before I became a rancher, I was a cowboy, and I cowboyed in 14 different states,” Hoy says. “The ranches that were really thriving and growing and doing well seemed to be really weird ranches. Ones that were doing unconventional, odd things — cell grazing holistic management and stuff like that. They are the ones who could afford to hire me as a cowboy.”

Hoy is the first to admit there are far easier ways to make a living besides ranching, but when his cousin proposed a partnership to start the Flying W, he couldn’t resist. Hoy jokes he’d never had a checkbook as a cowboy so he provided the sweat to match his cousin’s equity starting out.

“I was very fortunate in that I didn’t have any money,” Hoy says. “If I’d had assets or money or equipment, I might have gone down some pretty expensive paths. I figured out pretty quickly I didn’t want to buy equipment, I just wanted to do it all as sustainably as I could because I didn’t have cash.”

The plot of prairie at Flying W is among the best in the world for grazing. Finding the right way to use those pastures was the key to ensuring Hoy and his family could continue doing what they love.

“The whole reason we do this is to be on horseback and take care of cattle,” he says. “There are much easier ways to make a living, but this is what we love. The more we’re on horseback and around cattle, the happier we are.” 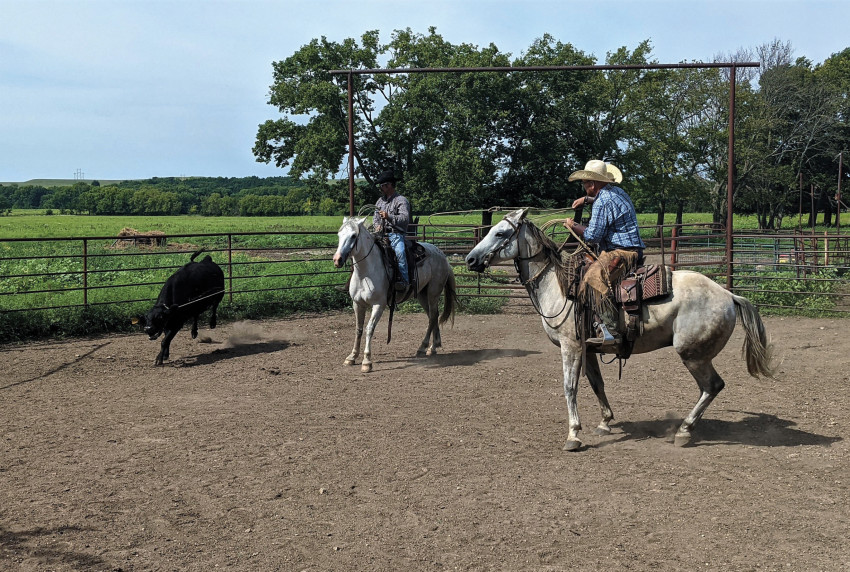 The official motto of the Flying W is “Unconventional ranching on protected prairie,” but unconventional is a polite way of saying “weird,” or at least it was 25 years ago. But Hoy will have to update his motto sooner rather than later as his formerly unconventional practices around soil and plant health have become more mainstream.

“There were a handful of people around who knew what we were doing or understood it,” he says of getting started. “A lot of people thought we were pretty crazy. Over the years that’s really changed. People are really starting to figure out soil fertility. There’s been a sea change and people are really paying attention to using plants and animals to stabilize the soil.”

People use grass and prairie interchangeably, but a healthy prairie is an entire ecosystem of grasses and flowering plants called forbs and shrubs. Like a forest, there’s a canopy and floor with a wide range of flora and fauna in between. The tallgrass prairie in Chase County has developed over thousands of years with the help of grazing and fire, both of which are still used today for a healthy prairie.

Most ranches in Kansas use seasonal grazing, or letting cattle munch on pasture from spring until late summer or early fall, then supplementing their diet with hay and protein in the winter. Hoy quickly realized he didn’t have the money to buy haying equipment, but he knew with the right management, the prairie could provide year-round forage.

“In the 20 years I’ve been here we’ve fed maybe 10 bales of hay to cows on grass,” Hoy says. “The only time we’ve fed hay is after a really bad ice storm where it really locks up and the cows physically can’t get to the forage. They’ll dig through two feet of snow to get to grass, though.”

He discovered burning every three to five years, and varying the timing of those burns between spring, late summer and early fall, to be the key to producing a diverse prairie with cool and warm season grasses mixed with forbs and legumes that provide sustenance for all four seasons.

“We see a lot more buffalo grass, sedges and bluegrass come on stronger in the fall,” Hoy says.

While extending the grazing season negated the need for haying equipment, Hoy knew making the prairie more productive meant he could stock more cattle, which also increased his profit margin. He found cell grazing — or placing large numbers of cattle on small areas for short amounts of time — could induce forage growth.

The intense grazing is similar to mowing your lawn, especially during prime growing season. Both methods stimulate and invigorate plant growth. This rapid regrowth enables a higher stocking rate, essentially allowing a rancher to use less land to grow more beef.

Under traditional methods, cell grazing is labor intensive since cattle have to be moved daily or even more frequently. Additionally, fencing is often used to keep the herd in a particular area. None of that was appealing to Hoy.

He opted for loose herding, where they simply moved the cattle to grazing patches and used an incentive like a salt block to keep them there.

“Over the years we’ve honed that down to what we call IMG, or instinctive migratory grazing, where we get them acting more like a herd of wild grazers,” Hoy says.

It’s not as precise as cell grazing, but it’s a lot less work for Hoy. The Flying W uses IMG in all their pastures, but it works best in two of their largest parcels; one is 1,200 acres the other is about 2,000. All the cross fencing is gone so the cattle can create their own paths through the open range, which has affected more than just the herd.

“The movement of deer, even birds, behave differently without those fences there,” Hoy says. 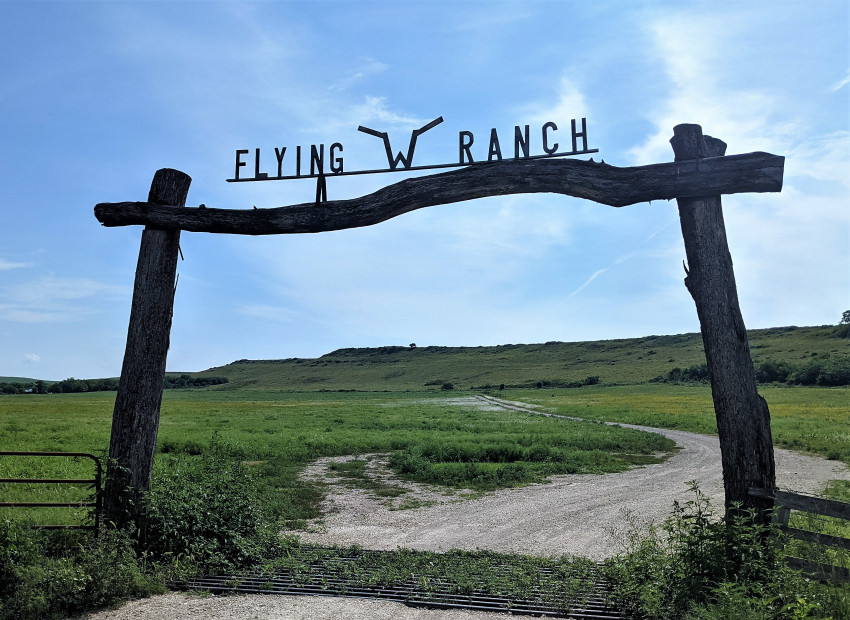 For nearly two decades, the Flying W also hosted guests for a variety of agricultural activities from horseback riding and cattle drives to prairie burning demonstrations and more. It started slowly in 2000 as a way to help people not connected to agriculture see what ranch life is all about.

When Warren Kruse died in a 2004 plane crash, the Hoys leaned on the guest ranch to pay the bills. When COVID-19 hit in 2020, it forced the closure of the bunk house and associated activities. That’s when the Hoys realized how tired they were from running two separate businesses.

“We realized we’d let some things slip,” Hoy says. “We were just getting the ranching done and we had to make things work. We were squeezing (ranching) into three or four days a week.”

Some of the burning demonstrations drew up to 400 people, and Hoy believes they had a substantial impact on how the public views the use of fire in the Flint Hills. He wants to continue offering similar educational services, just on a smaller scale.

Kruse’s death also delayed the other plan for the Flying W: to place the entire ranch under conservation easements.

“We had easements going on all the property right before he died,” Hoy says. “It took several years to line them up. We’ve slowly put it back together and by March we’re going to have that done.”

The perpetual easements ensure the land can’t be developed, and must remain as ag-focused land forever.

“We have a lot of stability in our future,” Hoy says. “We’re going to be operating at the size we are well into the next generation.” 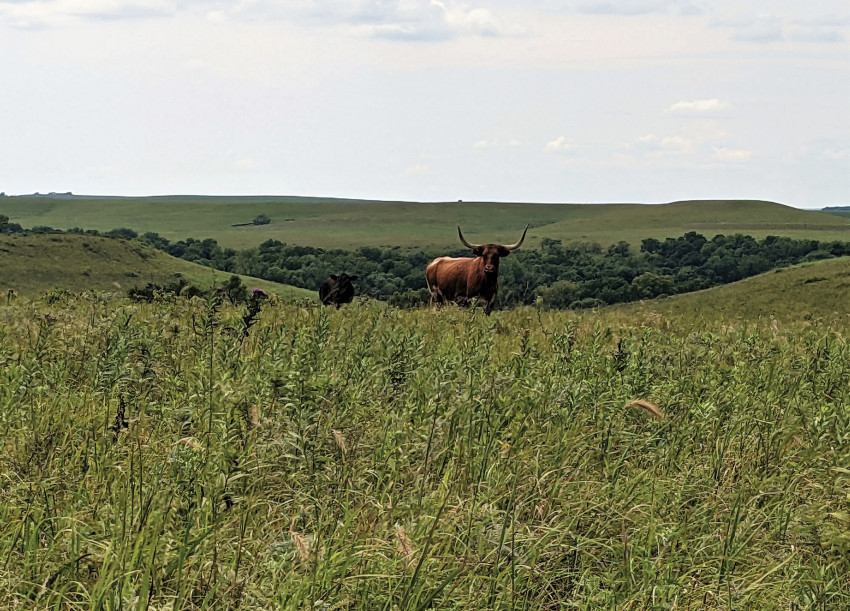 Through 25 years of ups and downs, the Hoys have made “unconventional ranching” more traditional, and they are being recognized for their conservation efforts. The Hoys have received the Sand County Foundation’s Leopold Conservation Award, in addition to being awarded a “bird-friendly” beef designation from the Audubon Society for grazing practices that sustain both cattle and birds.

Like all ranches, Hoy says the list of projects and experiments are endless. There’s one project still a decade or so away, and that’s measuring the rate a prairie can build soil on former farmland. He’s got the perfect test plot just off his front porch of a field converted in 1998 abutting native prairie.

When the ground was surveyed for the conservation easement, the surveyor measured the erosion of the field that had been farmed for more than a century. It had lost an average of three and a half feet of soil compared to the adjoining prairie.

“What I want to do is wait 10 more years and have someone come back and measure to see where we’re at,” Hoy says. “I’d suspect it’s recovered maybe a half-inch at this point. We’ve still got a long way to go.” 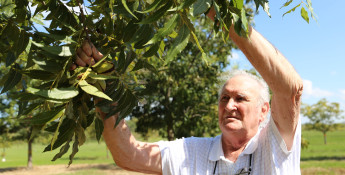 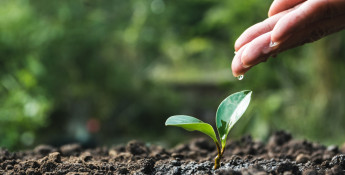 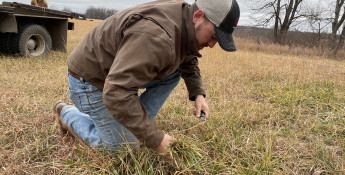 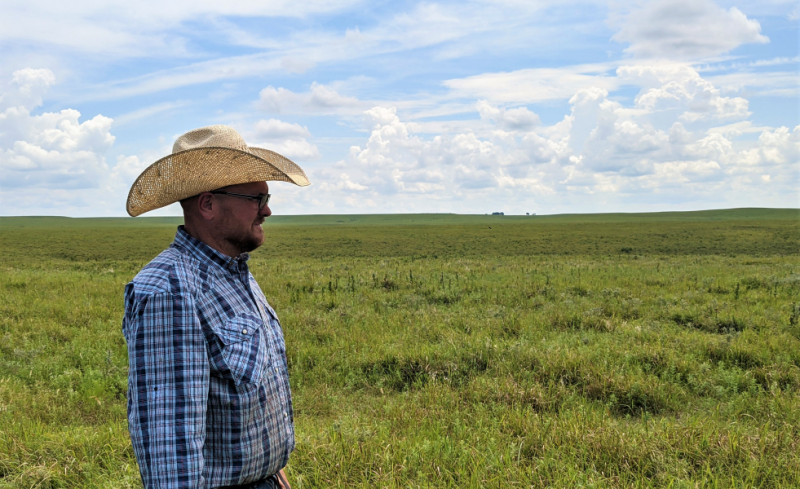