When Garrett Love returned to his family’s farm in southwest Kansas, he wanted to find a way to add value to the operation his father started. The mostly irrigated ground near Montezuma was ideal for raising corn, milo, soybeans and wheat, but Love believed there was one crop they hadn’t fully developed — the wildlife like pheasants, quail and deer already on the property.

“I saw there was some potential through recreational and hunting opportunities to bring in folks from all over the country to enjoy what we do and love out here,” Love says. “We’re farmers first, but sometimes different things make more sense for the type of land we have.”

Since starting Western Kansas Pheasant Hunts in 2012, Love has grown the operation from a single group to a full-scale business occupying most of his time from mid-November through January, the prime season to hunt upland birds like quail and pheasant.

“When it comes to hunting season, it’s really hectic,” Love says. “We have a lot of guys we consider to be good friends. They come to hunt, we get to know them and it’s fun to have them back. It feels like a family after so many years.” 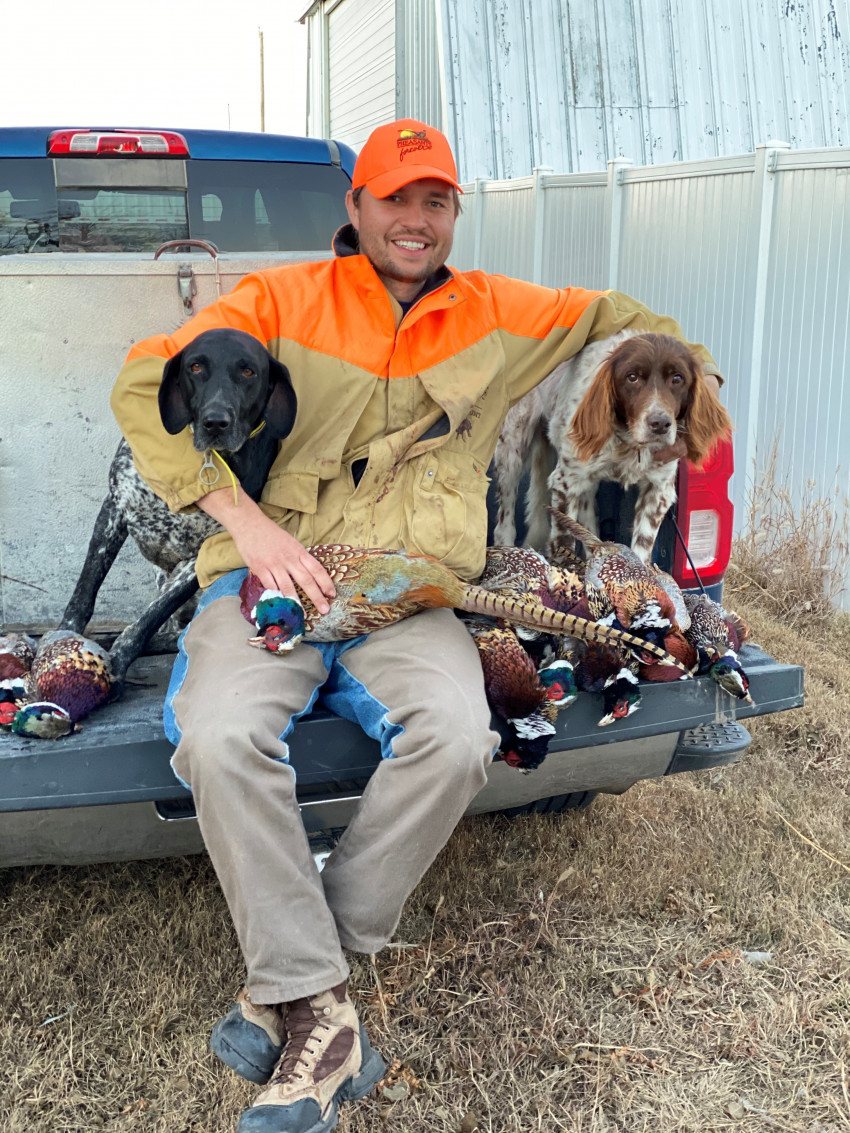 While deer is one of the options at Love’s hunting operation, the topography really only allows for rifle hunts and the population isn’t as strong as it is in eastern Kansas. The real draw, as the name suggests, is pheasant with quail as an added bonus for some groups.Pheasants are often called “ringnecks” for the distinctive markings around their throat. The markings on male birds, or roosters, are most prominent with a red wattle and green head shifting to copper or chestnut-colored bodies with a long bunch of tailfeathers. The roosters are about the size of a small chicken and the males are the only pheasants hunters are allowed to shoot under state regulations.

Quail are smaller, slightly bigger than a robin, with round bodies speckled with brown, black and white to blend into patches of grass or woodlands they inhabit. They emit a telltale, two-syllable whistle that matches the cadence of “bobwhite,” and they’re often referred to as bobwhite quail.

Pheasants are still the number-one target at Love’s operation, though some groups do enjoy the opportunity to shoot quail.

Love’s hunting operation starts on the second Saturday in November when the season for pheasant and quail opens. That date is also one of the most in-demand slots for hunters with groups of 15-20 compared to average sizes of four to 10 shooters later in the regular season. Each hunter can shoot four pheasants and a maximum of eight quail per day.

"We have a lot of guys we consider to be good friends. They come to hunt, we get to know them and it’s fun to have them back. It feels like a family after so many years."

Guests arrive at the Love farm and are treated as if they’re at an all-inclusive resort. There’s a farmhouse that’s been converted to a lodge on the property, meals are provided, and hunting dogs are also available for groups who don’t bring their own. “They come in the night before the hunt, stay on the farm and we provide meals,” Love says. “My wife, Caley, and mom, Sue, help with that.”

While lodging and meals aren’t the main attraction, Love says he tries to be flexible and offer a range of services to each group.“We do self-guided and fully guided hunts,” he says. “We try to accommodate what people are looking for. The main thing we try to focus on is taking care of people who want to experience pheasant, quail and deer hunting in southwest Kansas.”

A typical day for a guided hunt starts with breakfast followed by a safety meeting. Hunters are in the field shortly after 9 a.m. for a few hours of pursuing birds. After a hearty lunch break, they return to the field until about 4 p.m., when they head back to get cleaned up to eat dinner and tell stories around a campfire.

Love says the farm has always supported strong populations of birds and deer, thanks in large part to his dad’s dedication to wildlife and conservation before Love started his hunting operation. Modern data collection has helped make even better management decisions for both the farm and hunting operations.“

We have tried to find areas where it’s not quite as productive ground, not quite as profitable to farm and tried to transition that to different programs that benefit wildlife,” Love says. “I think that’s a really great thing precision agriculture has provided: the ability to target some of these lower-performing areas.”

Rather than transitioning an entire 160-acre farm field to grass, Love says they use the data they collect to target the ground that’s lost money every year, which could be as small as 20 or 30 acres. That allows them to increase the amount of habitat available to wildlife while boosting the bottom line on their farming operation.“

For us some of those are the really sandy areas or different mudholes that just don’t produce a crop,” he says, while noting in a 160-acre field irrigated with a center pivot, there’s about 35 acres the sprinkler can’t reach. They’ve taken some of those out of crop production and planted grass to increase habitat.

Farmers and ranchers have always been at the center of Kansas’ longtime hunting tradition. They often host friends and family members looking to harvest all sorts of wildlife, but as more people have moved to cities, the dynamic has changed.While the majority of Love’s hunters come from Kansas and nearby states like Arkansas, Oklahoma and Texas, he’s also hosted visitors from as far away as Pennsylvania, Florida and California.

“How much folks are willing to pay to hunt at different places has increased a lot over the last couple of decades,” he says. “It’s brought in a lot of tourism to rural Kansas. A lot of dollars to rural communities. I think that’s valuable.”

Love says there’s room to balance the business side of hunting with the desires of friends and family who enjoy the sport.“We have them on our farms still,” he says. “There’s value in the relationships and the goodwill, so we still have a lot of that going on.”

Love says most of the hunters are simply looking for the opportunity to have a different experience, and southwest Kansas has some of the best pheasant hunting in the world. Through Western Kansas Pheasant Hunts and the family farm, Love has worked to combine two of his passions, which has enabled both businesses to thrive.

“They’re bringing in a lot of revenue to the state, and I think that can be something farmers can do to essentially harvest a different commodity,” he says. 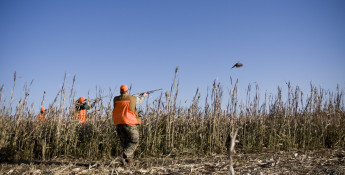 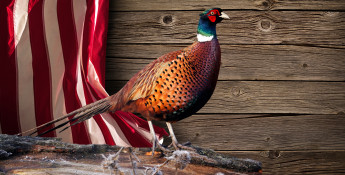