For decades, hunters have flocked to the Bigge Farm for a one-of-a-kind experience

A brisk fall wind whipped through the northwestern Kansas countryside. Heading north to south, the cold air nipped and stung the bright red cheeks of the hunters who high-stepped through the weed-choked draw.

The men had traveled from Springfield, Mo. to the Bigge Farm near Stockton to try their luck hunting pheasant and quail. Suddenly, as if on command, they stopped. Craning their necks, they listened to the quail calling to one another in the small patch of grass ahead.

As they continued, the hunters walked a little slower, their hearts thumping in their chests. Eyes strained to see the little birds scurrying about in the thick weeds.

Just a few more steps and one of the Brittanys went on point. This time the men inched forward even slower as their hearts shifted into overdrive.

Whiiiittttteeeeerrr. The covey exploded into the air.

Shotguns shattered the silence, waking the early afternoon from a deep, silent sleep.

“Look at that dog work,” Jim Riggins says as one of his Brittanys darts through the brush to retrieve the downed game. “That dog is worth the whole day’s hunt.”

Later that day after the hunt ended, the men unloaded their guns and zipped them up in their cases. After they downed a cold one, they gathered around the truck to admire their game — eight quail and a dozen pheasants.

“It doesn’t get much better than this,” Riggins says.

Those words are music to the ears of Tom, Ruth Ann, Doug and Stephen Bigge.

“We try to provide an enjoyable hunting experience,” Tom says. “We do everything we can to ensure that happens.” 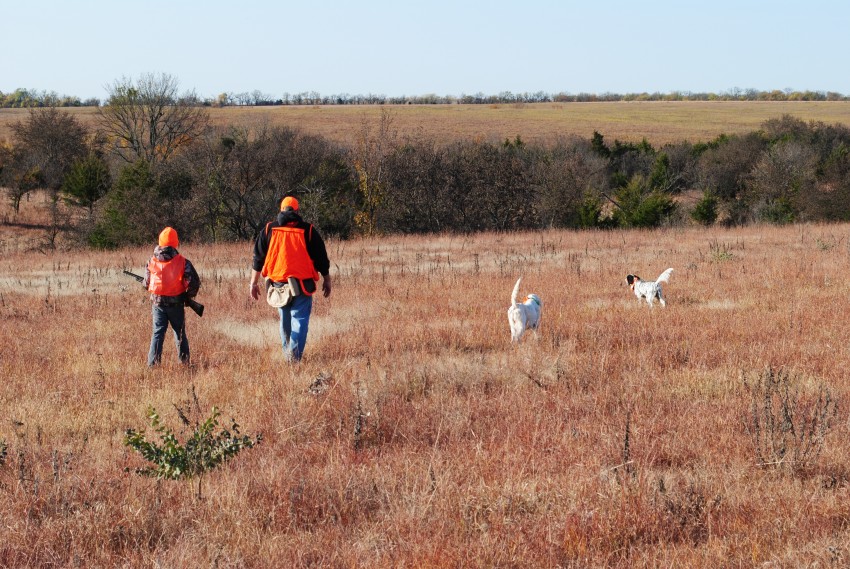 Hunting on the Bigge Farm results in an authentic hunt. Nothing commercial about the Bigge hunting experience. No T-shirts, no koozies sporting the Bigge name or flashing neon signs indicating your arrival.

On the Bigge Farm, hunters always enjoy a quality hunt, no pressure, and most importantly, have fun while doing so.

While first-time hunters might be considered clients, they usually become friends after the first hunt, Stephen says.

“We try to make the guys feel at home and treat them like extended family,” he continues. “We don’t provide dogs or guides, but if the hunters want someone to go with them, Doug or I are more than happy to. We strive to give the guys the best chance for a good hunt.”

Many of the hunters are repeat customers and prefer to go their own way. For most hunters, finding the birds is half the fun. For some, it’s bagging the birds, while others just enjoy watching their dogs work the wide-open spaces to find the pheasants or quail.

Hunters travel from all over the country to hunt the Bigge Farm. Some come from as far away as North Carolina, Ohio and Pennsylvania.

In addition to pheasant and quail, turkey and deer are also found on the 4,000 acres. This working farm has been in the family for more than 100 years. 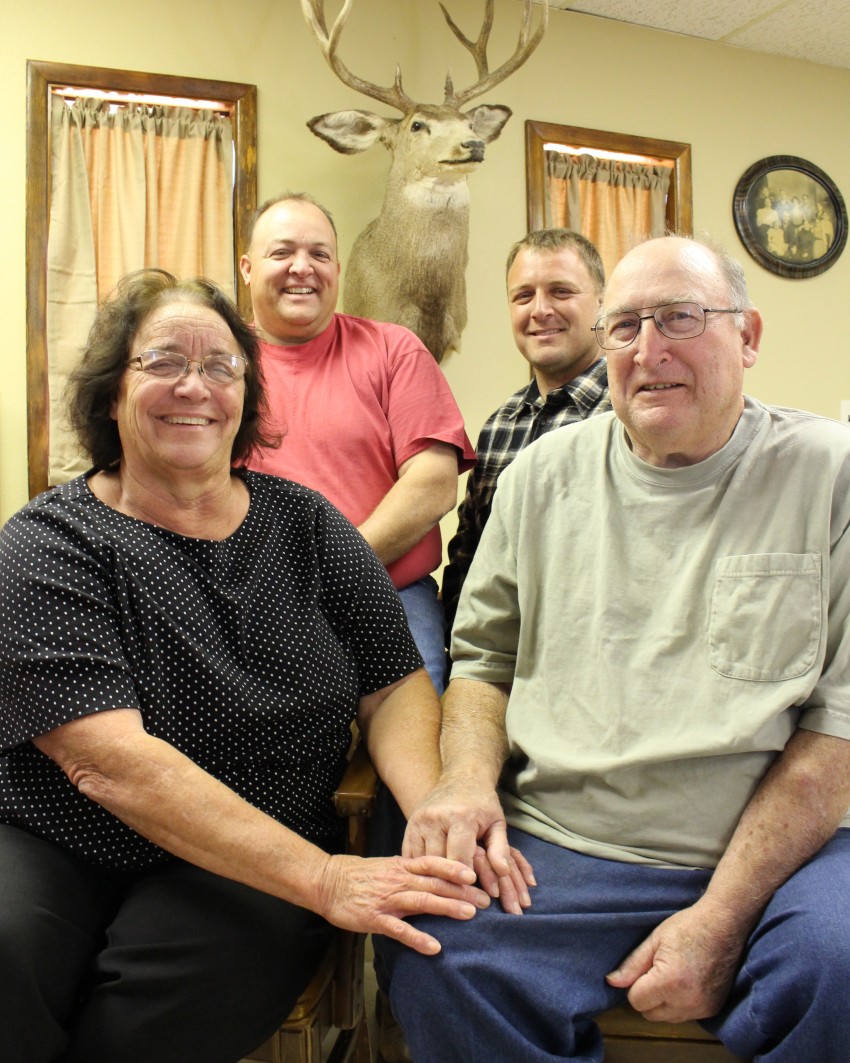 The Bigges first offered their land to hunters nearly 60 years ago. Since that time, hundreds of hunting parties have traveled to their land in northwestern Kansas.

Riggins brings a party of four to six hunters every year. He travels 500 miles and spends at least 10 hours on the road to travel from his Missouri home.

“I wouldn’t miss it [pheasant and quail hunting] for the world,” he says. “I’ve hunted pheasant in North Dakota, South Dakota and Nebraska, and for me this is the best hunting I’ve ever had.”

And while he loves hunting, he enjoys watching his five Brittanys work the birds just as much. Riggins also enjoys seeing the younger hunters bag birds.

“I’ve hunted for years,” the retired banker says. “What I enjoy the most today is the people in western Kansas. I love the Bigge family. They’ve become dear friends.”

This feeling of friendship has become mutual between the Bigges and their hunting clientele.

“The people who hunt our land are the best,” Doug says. “They’re good, honest, hardworking people just like us.”

The Bigges do their best to keep hunting affordable for these hunters, and to provide added perks.

“We can’t guarantee how good of a shot you are or how good your dogs work the fields, but we can provide you with tasty, home cooking,” Tom says.

From the beginning of their family hunting business, Ruth Ann has prepared the best food she knows how to cook from scratch. These meals are served on the family’s large kitchen table.

Ruth Ann has cooked for the hunters for 47 years, shortly after she and Tom married. Sometimes they feed the hunters meat out of their own freezer. Most meals include beef of some kind, such as smothered steak, roast beef or meatloaf.

“They rave about Ruth Ann’s cooking,” Tom says. “Oftentimes, they ask her to fix meatloaf sandwiches when they finish hunting for the drive home.” 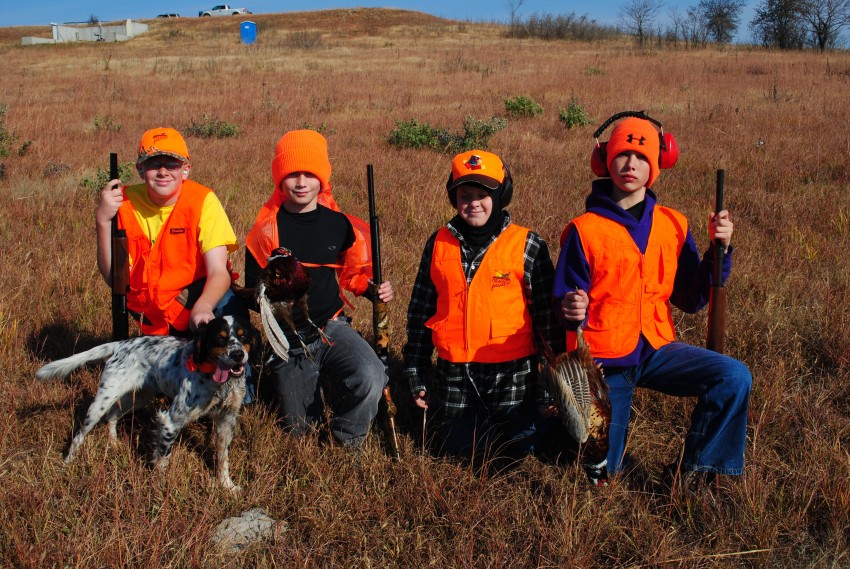 Riggins is already dreaming about the upcoming hunt although it’s still several months away. Because of the drought, pheasant hunting hasn’t been very productive for several years, but 2015 promises to be much better.

Traveling the country roads back and forth between Stockton and Plainville where he works, Doug has seen five and six groups of pheasants with at least one to five hens in each party nearly every day.

“I’m seeing birds every couple miles on some days,” Doug says. “That tells me there are more birds out there because I’m not seeing all of them.”

The pheasants and quail enjoyed a favorable nesting season this year. The weather was cool into the first week of June with just about the right amount of moisture. No hail to speak of either.

The small insect numbers have been up as well, meaning there is plenty of food for the newly hatched chicks to eat.

Like so many of the hunters who come to the Bigge Farm, he’s counting the days.

To find out more about hunting opportunities in Kansas, visit www.ksoutdoors.com/Hunting.