How many couples do you know who would happily duck out of a Valentine’s Day dinner to make sure they had the winning bid for pigs in an online sale that would be the start of their herd?  Eric and April Castle of Pleasanton are such a couple.

“I knew I was married to the right woman,” Eric says. “When I told April I was worried if I had the winning bid, she agreed we needed to leave the dinner and go home to check on them. Now, that’s real love!”

For farm couples like the Castles, centering their lives around and caring for animals 24/7 is a way of life. Although they both grew up around farming, they are unique because together they started their own farm. They met in college and, although April wasn’t a big fan of pigs, their desire to start a farm together helped her see the value of tapping into Eric’s expertise. He had actually gone to college on a livestock judging scholarship so was an expert on hogs.

“I grew up on a hog farm and showed them as 4-H projects,” Eric says. “But Dad sold out when I was a senior in high school. April and I have started our own herd and have slowly grown it through the years. The first few years were a nightmare; everything that could go wrong, did.” 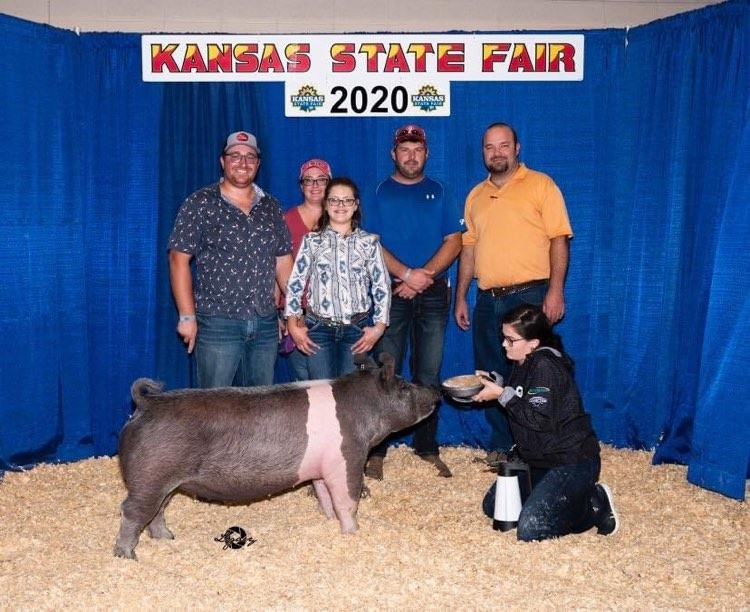 Young couples starting a farm are faced with huge challenges like startup costs of land, buildings, equipment and livestock. The Castles’ goal was to grow their farm debt-free. Eric teaches FFA and agriculture classes in a local school and April runs a daycare in their home.

The typical business model for raising livestock such as cattle or hogs is that farmers raise them to a certain weight then haul them to a processing plant that butchers the animal, and supplies the finished product to grocery stores. Once the farmer takes the livestock to the processor, they are given the going market rate.

However, many livestock producers are learning to sell direct-to-consumers and bypassing middlemen in the process. A decision the Castles made a few years earlier prepared them to respond to consumers during the pandemic who, after finding meat counters empty in grocery stores, began looking to local farmers to provide meat and other foods they grew.

“We were struggling to find a way to make extra money with our leftover feeder pigs,” April says. “So a few years ago I suggested we have some processed and try to sell the meat at a local farmer’s market.”

“I didn’t think it was a very good idea at first,” Eric says. “But she was right, again, and it’s been the best move we’ve made. We learned quickly that the way the locker packaged the meat in white butcher paper wasn’t a good idea. People wouldn’t buy it because they couldn’t see it. So, we started packaging it in vacuumed sealed clear plastic and sales took off.”

The Castles soon discovered that, in addition to selling regular cuts of pork, creating a unique line of specialty items like brats and patties hit a sweet spot with customers.

“Brats are a specialty item that we sell out of quickly,” April says. “We took them to a local grocery store to ask if they would sell our products. On Monday they sold out and doubled their order by Wednesday and tripled it by Friday. We try new flavors and they are so popular we have a hard time keeping up with demand.”

When the pandemic hit earlier in 2020, the local locker where the Castles had been doing business for years contacted them with an offer.

“The locker called and said they had (butcher) dates available,” Eric says. “They told me if I was willing to take the risk and book those dates, they would hold them for me. So, we took the risk and it paid in huge dividends.”

“The Facebook group Shop Kansas Farms helped consumers find us,” Eric says. “It opened people’s eyes to see there’s more than one source to get things from. We have butcher dates booked solid through 2021 for dates for pigs that aren’t even born yet and we have doubled our sow herd this year to help meet demand.”

“For the first time ever, we have people coming to the farm to purchase from us,” April says. “People are willing, and even excited, to leave the cities and drive down country roads to come purchase from us.”

This type of customer relations is a new experience for many farmers as they learn to answer questions about how they raise their animals, how hogs are processed and how things are priced. This type of real-time education between a farmer and a consumer is new to both groups. Farmers are excited about the opportunity to answer questions about their industry from customers who are willing and excited to buy from people they know.

“This year has been a big learning curve for us,” April says. “We could never have predicted our level of growth just this year alone. It has been amazing! Although the pandemic has negatively impacted so much and some farms have had the horrors of euthanizing their animals, it’s been a tremendous year of growth for us. Our pivoting to selling direct-to-consumers a few years back was key to our success this year.  It has also helped to have a wholesale business to local grocery stores that carry our products.”

In addition to raising pigs for meat, the Castles also raise pigs as show animals.

“Back in 1994, I didn’t know a thing but had friends help get us pigs and get us lined out in showing pigs,” Eric says. “I was happy to get a blue ribbon and Mom said if I was going to show pigs, I needed to learn livestock judging. I went to Fort Scott Community College on a livestock judging scholarship then on to Tarleton State University in Texas on the same kind of scholarship.”

Selling livestock for shows is a specialty niche for many farms and ranches who seek to combine all the best qualities of a breed into their animals. These animals are the finest of the breed, a result of years of breeding knowledge and careful consideration. It’s not uncommon for show animals to fetch a price of tens of thousands of dollars.

“When I was a senior in high school, I had the grand champion market hog and breeding gilt and had seven of the 10 class winners,” Eric says. “Showing pigs got in my blood when I was nine years old and I have loved it ever since.”

Like most farm families, the Castles pass their love for animals on to their children. However, farm children understand the animals they raise are part of a business, rather than just pets. Their daughter, Bristol, is four years old and 3-month-old son Cayden are starting their own herd. The money they make goes back into growing the herd as well as being set aside for their college fund. The nursery rhyme, “This little piggy goes to market,” takes on a whole new meaning to a farm kid. 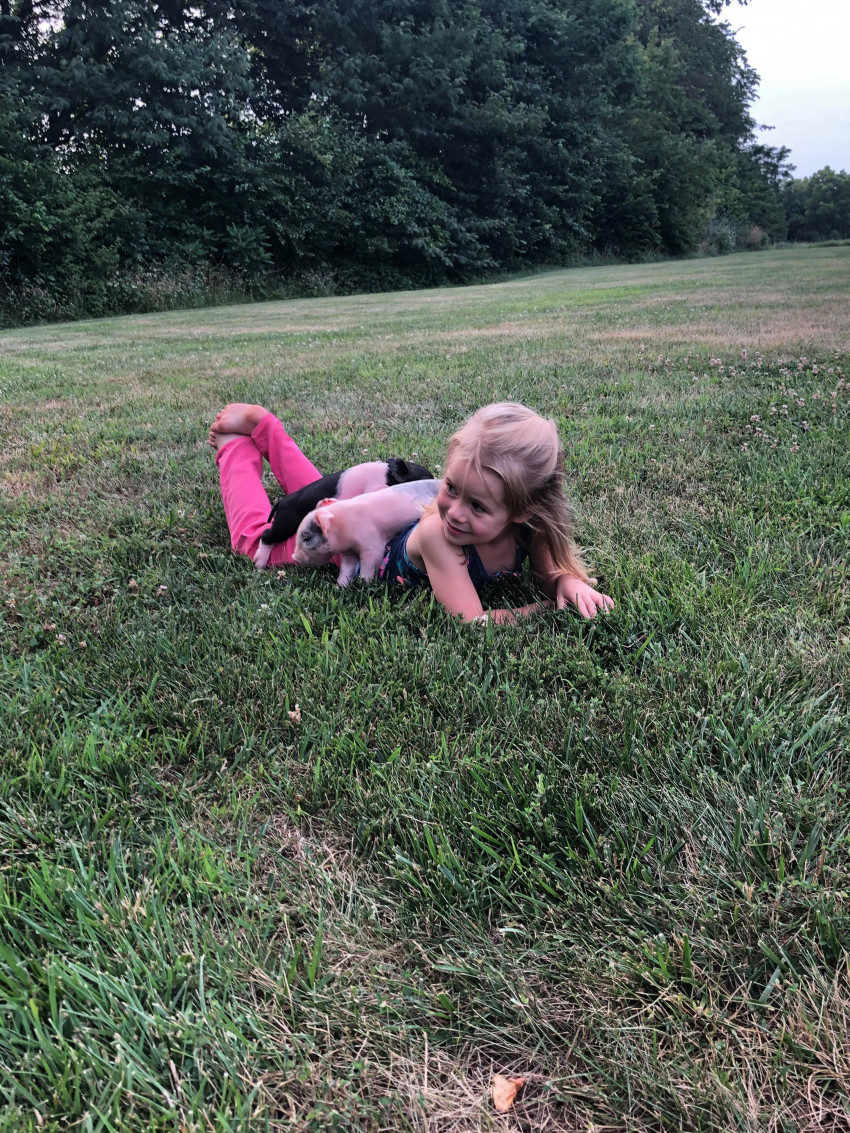 The Castles have also been chosen as Kansas representatives for the national Young Farmers and Ranchers (YF&R) group of the American Farm Bureau Federation, a highly esteemed honor.

The Castles are representative of a new generation of farm families whose passion for raising livestock is combined with creative ways to make a living. Farmers are entrepreneurs, architects, scientists, global economy experts, mechanics, carpenters, finance whizzes, real estate specialists and are highly self-motivated. 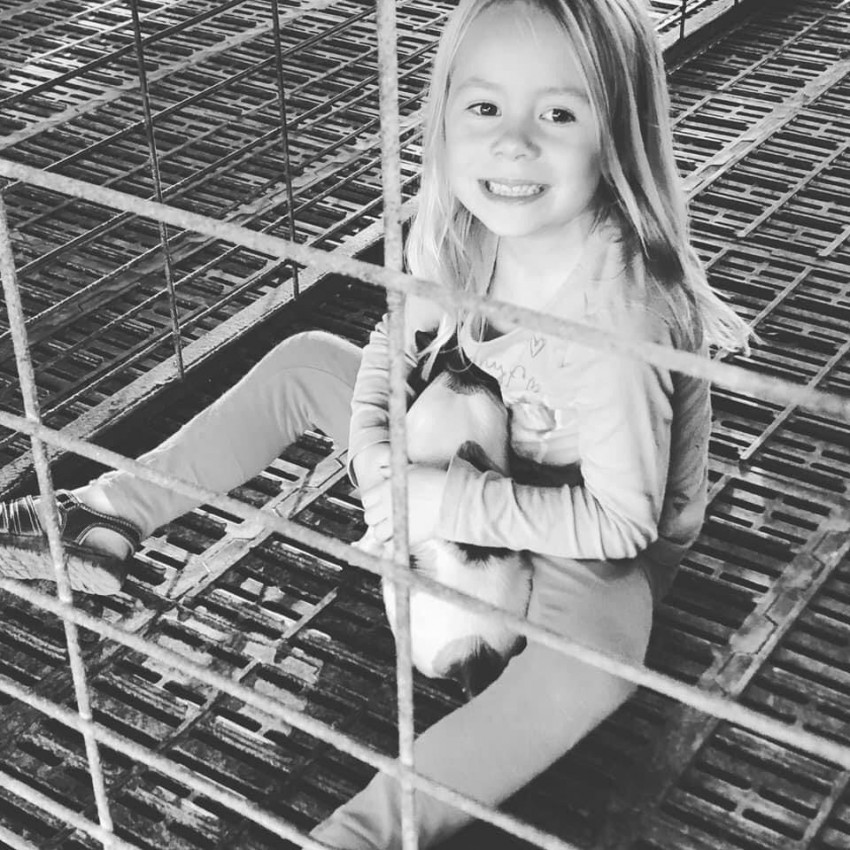 While they might not admit it, they are also hopeless romantics – except when they have to check on the winning bid for some pigs in an online sale. After all, their little piggies going to market is not just a nursery rhyme, it is how farmers feed their family and the world. 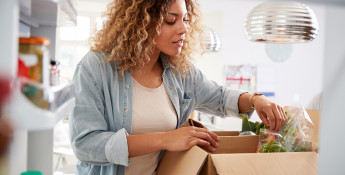 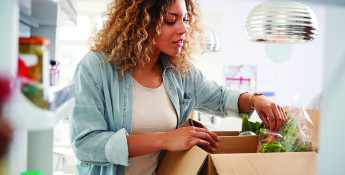 Shop Kansas Farms: A New Way to Connect with Farmers 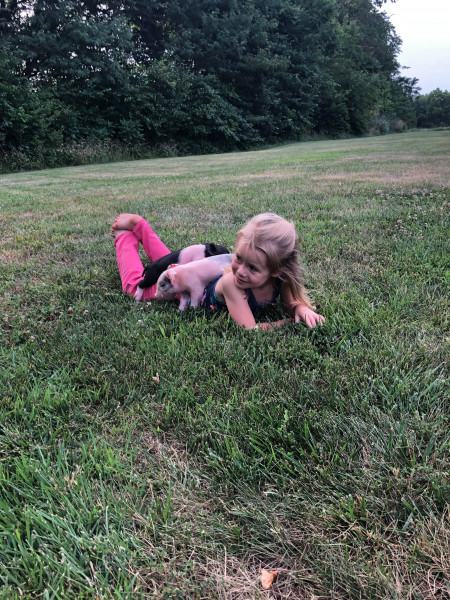