By Brandi Buzzard Frobose on September 17, 2020

Summer is generally the slow season for our ranch, which is good because it’s usually too hot to do anything else. However, once the end of August rolls in, we jump into overdrive preparing for fall and winter feeding by chopping our corn into silage.

What exactly is silage? It’s forage that has been preserved by fermentation and is most commonly made using corn, sorghum or other cereal grains to be fed to cattle, sheep and other ruminants. The corn we planted is specifically designed for silage production; it differs from field corn in that it’s biologically engineered to have larger stalks and more leaves, which leads to more product and feed. When corn or other plants are chopped for silage, the whole plant – stalk, leaves, husk, kernels – is used in the final feed product. While field corn isn’t picked until the plant is mostly dried down so it can be used for grain, often in September or October, we chop silage corn in August when there is still a significant amount of moisture in the plant because that causes the fermentation and preservation of the feed.

Because we only planted about 12 acres of corn for this silage crop and purchasing our own equipment is expensive, we hire a custom cutting crew to chop our silage. The crew includes a silage chopper, two trucks to collect and haul it, a big tractor to pack it down and a skidloader, all operated by skilled agriculture workers. 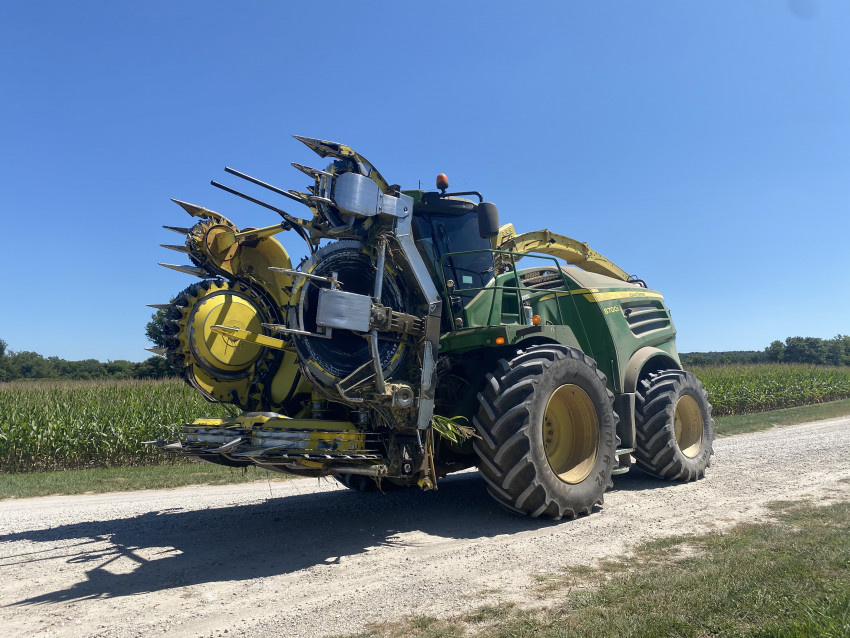 This is the first time we’ve ever grown and chopped silage, so we’ve been looking forward to this time with nervous excitement. I was so amped up once they arrived and started chopping that I watched the crew circle the field several times and used a considerable amount of storage space on my phone taking photos and video. 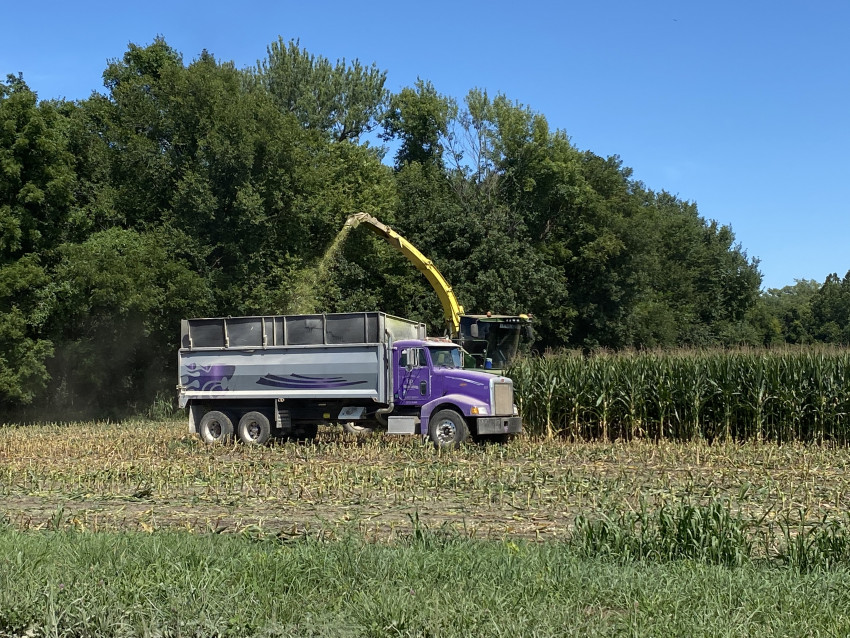 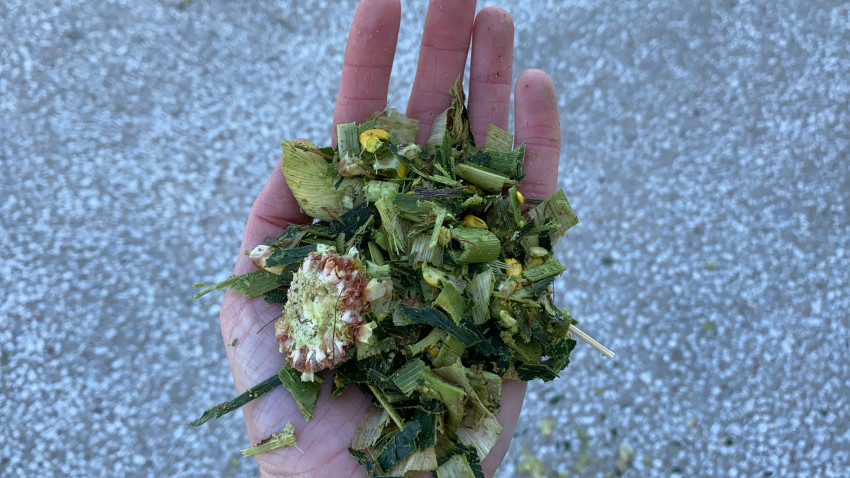 After the corn is chopped and put into the trucks, it’s hauled to the storage facility, commonly called a “pit*” or a “bunker.” We constructed our pit using last year’s round bales to retrofit a much larger pit down to our needed size. The trucks dump the chopped corn into the pit and a tractor spreads and packs it down – the tighter, the better. The ideal pile will have an anaerobic environment, meaning “without oxygen,” which will cause the silage to ensile and ferment. If too much oxygen is left in the pile, the feed will rot and all of the resources that went into producing will be wasted. 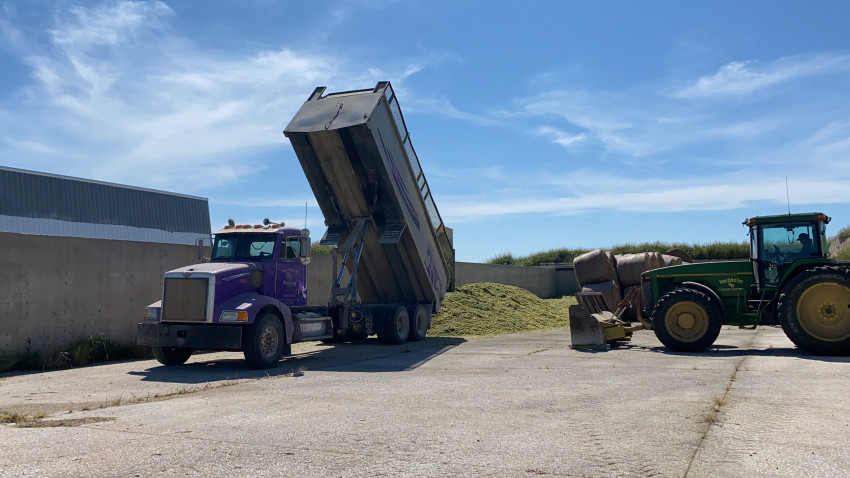 Once it’s tamped down tightly, we cover it with a plastic made specifically for silage and weigh it down with sandbags and old tires. This winter when it’s time to feed the cows, we’ll uncover the pit, load the silage wagon then replace the cover to preserve the feed. If we are diligent, the feed will last all winter and into the spring without spoiling. You can see the whole process in this YouTube video I made – our little rancher makes a sweet appearance, too. 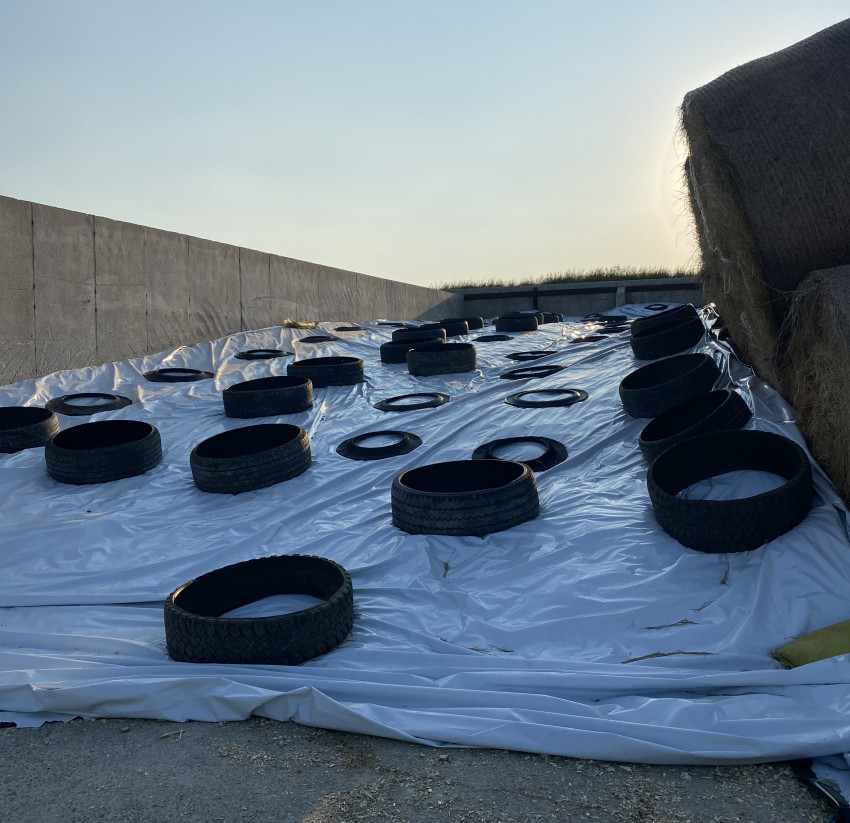 Not every farmer or rancher feeds silage to their livestock as it may not fit every production setting. For example, we chose to go the silage route because we have a fall calving herd and our cows need more energy in the winter, since they have baby calves at their side. Silage is a higher energy feed than regular hay, so it will help them maintain their body condition while also aiding them in milk production to grow big healthy calves. Additionally, we can get much more feed from 12 acres of silage than we can from 12 acres of hay, so the land becomes more productive in that aspect. As an added bonus, silage is highly palatable, so cattle are more likely to lick the bunk clean and not waste any feed. We are relatively new to the cattle production scene, so we are experimenting with different processes and management methods to see what works best for our ranch. Hopefully, feeding silage to our herd will yield great results and we’ll put a mark in the “good decision” column.

*I may or may not have spent several minutes humming “The Pit” by Mouse (Rat of Parks and Rec fame) during all of this. Check it out here. 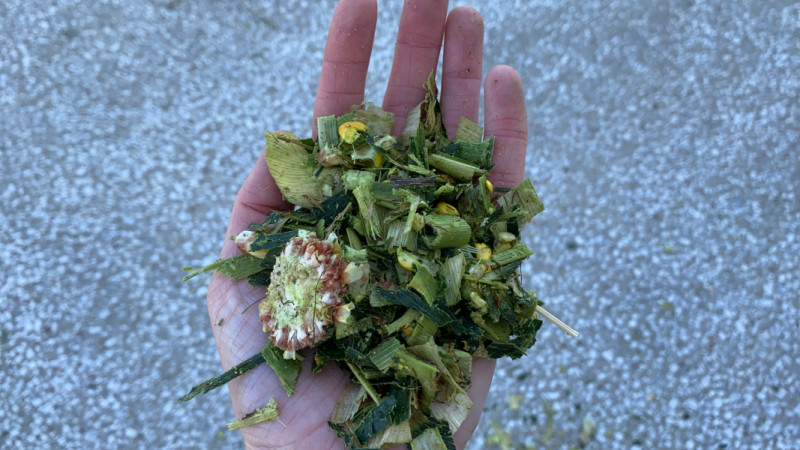