A program that remembers the fallen, honors those who serve and teaches the value of freedom has a strong presence in Kansas.

On Oct. 17, 2006, Corporal David Unger, a young man from Leavenworth, was serving his nation in Iraq. Unger was driving a Humvee, escorting 2nd Lt. Christopher E. Loudon. Insurgents learned of the escort mission and attacked with an improvised explosive device. Unger was just 14 days from turning 22 when he died.

Unger’s is one of the many stories of soldiers fighting for our freedoms and making the ultimate sacrifice. Honoring soldiers who have died, whether while on active duty or after leaving the service, is the mission of a national effort started by Morrill Worcester of Maine.

His project, Wreaths Across America, was born after an unforgettable experience at Arlington National Cemetery in Washington, D.C.

“My husband has always been patriotic,” Karen Worcester, volunteer executive director of Wreaths Across America, says. “That trip to Arlington National Cemetery stuck with him, and throughout his life he was reminded that much of what he had was due to the veterans of our country.”

Morrill is the owner of Worcester Wreath Company, a 4,000-acre forest of balsam fir in Maine. The trees are used to make handcrafted wreaths and centerpieces. In 1992, the company had approximately 5,000 wreaths in surplus, so the Worcesters decided to do something with them that ultimately created their long-term mission to honor veterans.

“We thought about how we could do something meaningful with the wreaths and that’s when my husband was given permission to take them to Arlington,” Karen says. “We had 12 volunteers help place the 5,000 wreaths at each of the veterans’ graves in a certain area of the cemetery. We were all in tears because of how beautifully meaningful it was. When my husband got home, he said it was something he’d always do — place wreaths to honor our soldiers.”

A PICTURE IS WORTH MORE THAN GOLD

Between 1992 and 2005, placing wreaths was a family tradition for the Worcesters. That changed when a photo of the headstones at Arlington, with bright green wreaths and eye-catching red bows against white snow — circulated on the internet.

“We received so much support because of that photo,” Karen says. “We had media outlets from all over the world contact us. We’re farmers, so it was all shocking to us. It’s because of that photo that Wreaths Across America, the nonprofit organization, was started, and has since grown 30 percent each year.

“Although it still holds a great deal of meaning to us as a family, the nonprofit was formed to expand the mission to communities across the country. We now have millions of volunteers all over the U.S., and last year they helped place nearly two million veterans’ wreaths.”

In 2007, Wreaths Across America was established as a nonprofit 501(c)(3). Its mission is to remember, honor and teach.

“We have listened to what is important,” Karen says. “Our organization has the opportunity to remember the fallen, to honor those who serve and to teach the value of freedom.”

As the organization grew, more people wanted to be involved. In 2008, more than 60,000 volunteers participated. That year, Congress voted unanimously that Dec. 13, 2008, was “Wreaths Across America Day.”

This day continues to be celebrated each year in mid-December as participating locations across the U.S. organize events and place wreaths on veteran gravesites. In 2018, Wreaths Across America had more than one million volunteers help with events.

Corporal Unger is one of 23,000 buried at Fort Leavenworth National Cemetery. His mother, Diana Pitts, serves as the Wreaths Across America statehouse coordinator in Kansas. She works with the governor’s office and the statehouse to organize a presentation of 36-inch wreaths decorated with flags representing each branch of the United States service in a ceremony to honor all members of the military who have passed. She also serves as the Fort Leavenworth National Cemetery’s volunteer coordinator, overseeing the planning for the Wreaths Across America Day events at that cemetery. 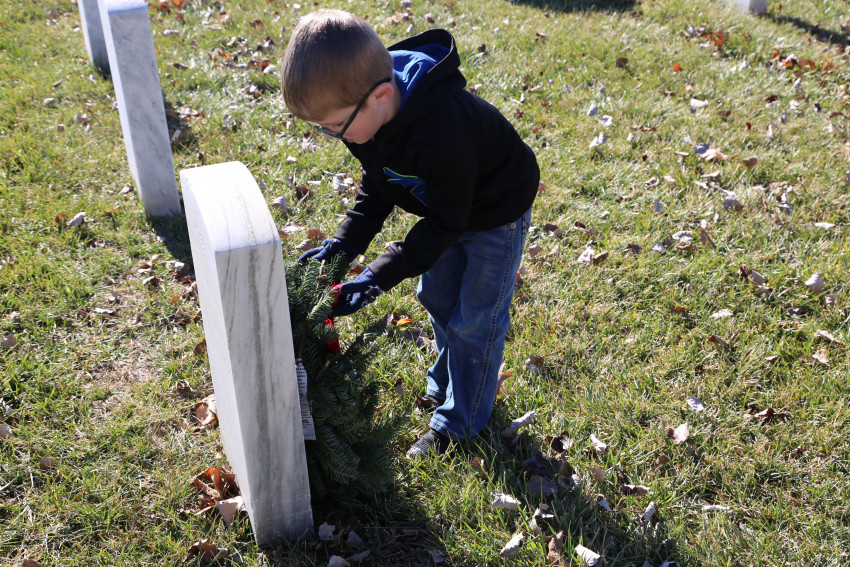 Pitts honors her sons — Corporal Unger and Sergeant Jeremy Unger — and her son-in-law Staff Sergeant Brandon Casey through her volunteer efforts with Wreaths Across America.

“I come from a long line of military service,” Pitts says. “My great uncle was the first to be killed in action during the Korean War. I do this to honor him, to honor my boys and to honor all who have served or are serving.”

Everyone has their “why” for helping with Wreaths Across America Day, and everyone would agree the experience is profound.

“For many people, remembering their fallen brothers and sisters is truly important,” Alexandra Desaulniers, Wreaths Across America public relations coordinator, says. “Honoring our national veterans and honoring the sacrifices made by those veterans and families is often something we forget and it’s important to bring back into our daily lives.”

The Fort Scott National Cemetery volunteer coordinator, Kevin Wagner, loves the opportunity to give back to an organization with such a noble mission.

“One of the great things about this volunteer job is the people I’ve met doing it,” he says. “It’s an honor to serve as a volunteer for this amazing event.”

ALL IN THE NAME

Although each location is a little different, Wreaths Across America Day involves a ceremony where each branch of the military places a wreath, “Taps” is performed and a semi-truck with hundreds or thousands of wreaths is unloaded for volunteers to place on each headstone. 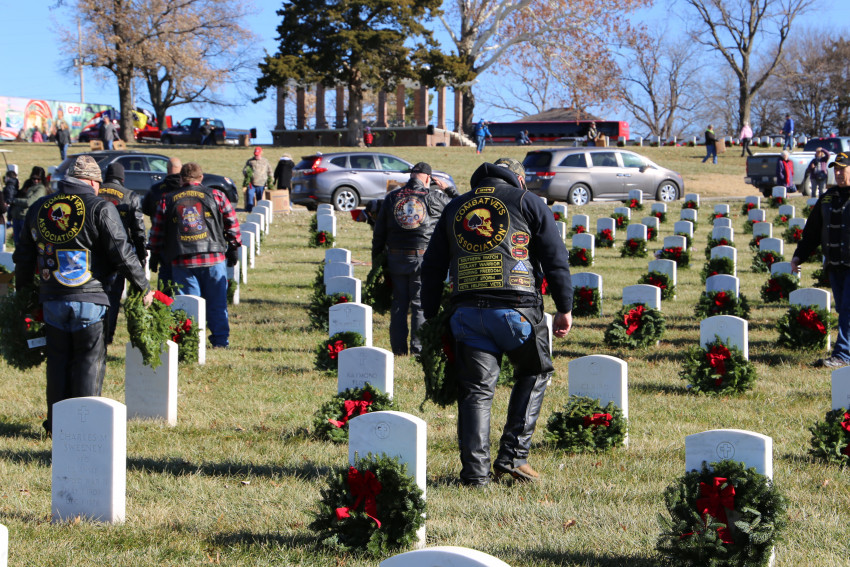 In 2018, every headstone at the Fort Scott National Cemetery — nearly 6,000 — had a live balsam wreath for the first time since the cemetery started participating in the event. Each time a volunteer laid a wreath, they said the name of the soldier out loud.

“You die twice,” Karen says. “The first time is when your heart stops beating. The second time is when your name is said for the last time. That’s why we say the names of each veteran when we lay their wreath — to keep them alive.”

When the day is done, the image of the wreaths covering thousands of gravesites is powerful. The wreaths will remain in place for approximately a month, depending on the location. Volunteers then remove them and recycle what they can.

GIVING BACK AND OTHER PROGRAMMING

Wreaths Across America is more than just one day. The organization has programming that helps communities across the nation. Through Wreaths Across America’s fundraising program, it has helped other nonprofits such as Civil Air Patrol, Scouts, 4-H Clubs, local VFWs and American Legions raise funds for their own community needs.

Wreaths Across America returns $5 of every $15 wreath sponsorship to other organizations. Since 2007, the nonprofit has given back more than $10 million to local charities.

Other programs Wreaths Across America conducts include the Thanks-A-Million campaign, which started as a thank you card distribution and has evolved into the “I Owe You” card, which can be sent to veterans or military members to show appreciation for their service.

“Our veterans were the fighters for our freedom,” Karen says. “It’s our job to be the caretakers of freedom. We are appreciative of their service, but we also know we owe it to them to be mindful of what they gave and to protect that.”

The cards can be ordered on the organization’s website, and you only pay for shipping.

The “teach” portion of Wreaths Across America’s mission includes curricula and books to help kids appreciate our veterans and the role they play in protecting our freedoms.

“We’re passionate about teaching youth about freedom,” Desaulniers says. “It’s about the next generation — the kids. We love to give credit where it’s due and that’s why much of our school materials encourage the involvement of local veterans.”

“I cry every time I tell this story,” she says. “One mother who lost her son asked if I would stand with her as she laid a wreath at her son’s headstone. I, of course, said yes. After she laid the wreath, she ran her fingers over the stone etched in her son’s name and said to me, ‘Don’t ever remember that my son died. Remember that he lived.’”

This year, Wreaths Across America Day events will be celebrated on Sat., Dec. 14. If you’re interested in volunteering, the event is free and open to the public at participating locations. For location information and more, visit wreathsacrossamerica.org. 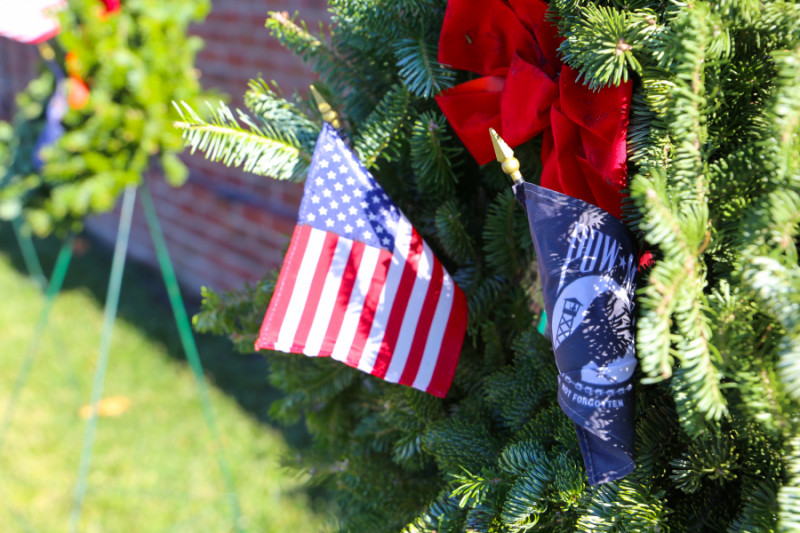