Through hope and perseverance, an old church building continues to bring a small community together

Across Kansas, we see small towns getting smaller. Population counts sometimes include dogs. A decrease in population usually means a decline in opportunities in the community. But in those same communities are people with pride for their home, faith in their hearts and a desire to make good things happen. In Yates Center, one door shutting meant a new one could be opened.

At the corner of Washington and Main sits a beautiful brick structure. At first glance, you notice its stainedglass windows, its inviting large doors and a sign you expect to tell you when services are held. But closer inspection provides a different story of faith, hope, courage and creativity. 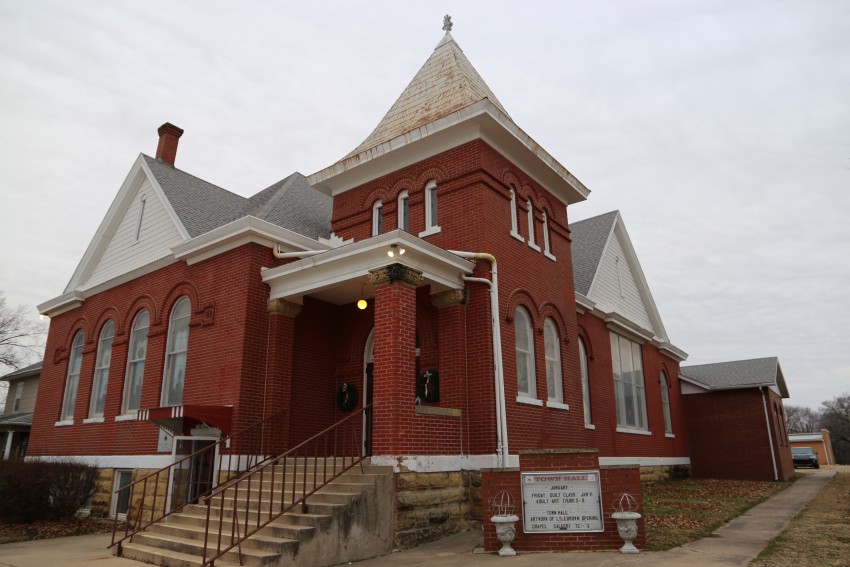 The Town Hall is a nonprofit organization founded in November 2017 by husband and wife, Mike McCullough and Janet Brilke. The organization operates in the former First Christian Church of Yates Center. The nonprofit provides space for community events, family gatherings, weddings, concerts and more.

Although once a thriving place of worship, the church, built in 1904, saw a decline in its congregation to the point of only 16 attending frequently, so paying the bills became a feat too overwhelming.

“The insurance was so pricey,” McCullough says, who was hired for maintenance work at the church. “They could no longer pay the bills. They had six months before they shut down and it was either donate the building to another nonprofit entity or tear the building down. Tearing it down was never an option to me, so I knew I had to do something. My wife and I visited, and we decided we’d create our own nonprofit.”

That was when The Town Hall was created, and the church was saved.

“My husband and I started this organization because we loved the beautiful building and knew there was a need in the community,” Brilke says. “We were so distraught at the thought of it being torn down. Mike and I are fortunate to have the support of friends, family and the community to start this adventure.”

A PLACE OF GROWTH

“There’s something for nearly everyone here,” Connie Schmidt, a board member of The Town Hall, says. “I help with quilting classes, there’s art classes by Kathe Hamman, another board member, and we offer the building to different types of events like birthday parties or reunions.” 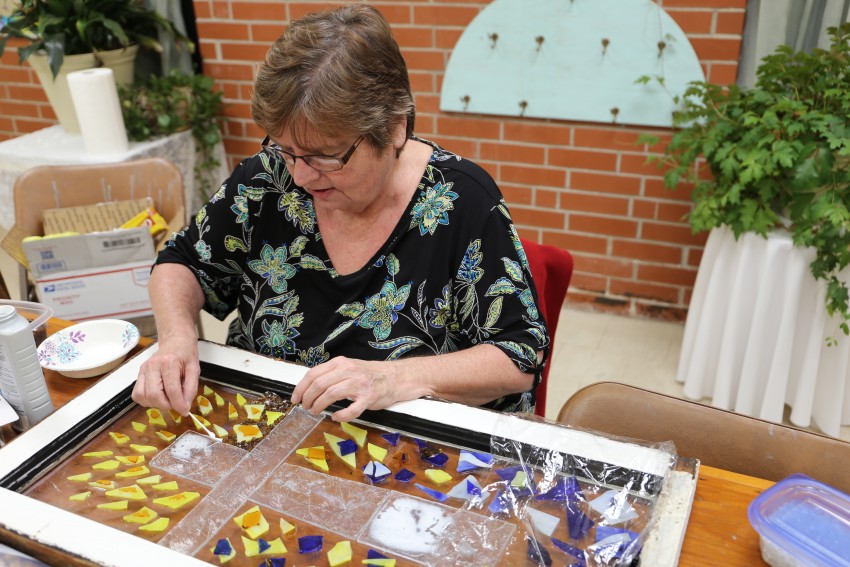 In addition, The Town Hall serves several community members as their place of business.

“There was a growth spurt for the church in the ’60s,” McCullough says. “They built an addition for classroom space, which is fortuitous for us now because those added rooms are currently used for business offices.”

“My husband calls it a small business incubator,” Brilke says with a laugh. “It’s a win-win because we offer an affordable place for small businesses to have a room in the building while helping us with bills since they pay rent.”

It didn’t take long for business owners to jump at the opportunity to work out of The Town Hall.

“We were full within a month,” McCullough says. “This community is so supportive.”

Also helping with the costs of maintaining The Town Hall is the use of the parsonage next door. Tradewinds is full of jars of jelly, homemade signs, retro housewares and more. And it’s all for sale. It provides money through consignment sales and rent payments from others wanting to sell their wares. 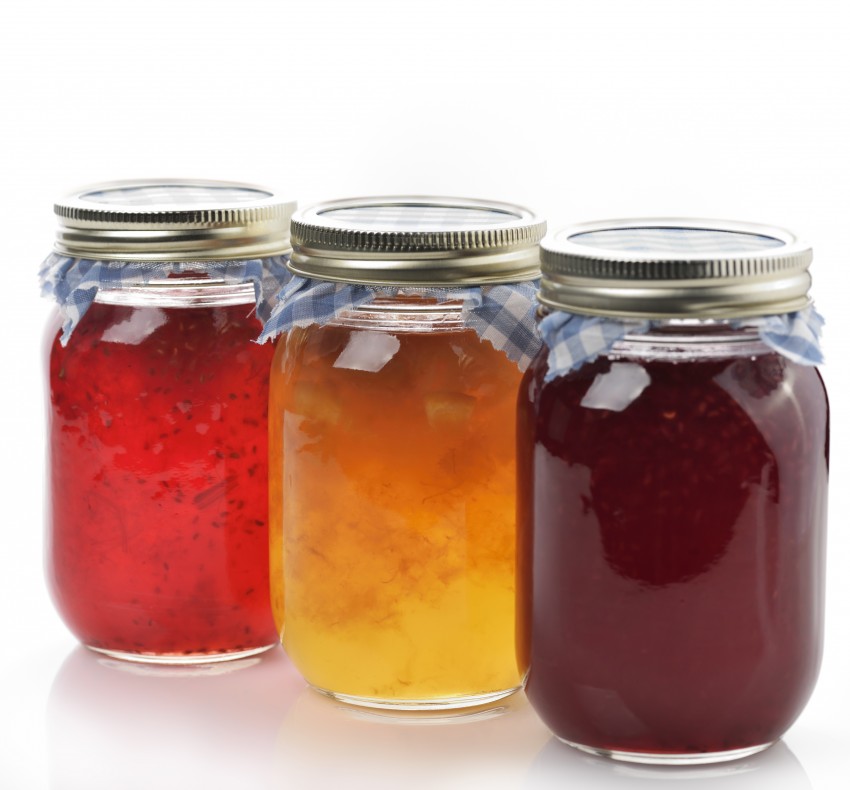 For one community-driven effort at The Town Hall, faith, strength and support were significant.

Ron McGee, 62, moved to Yates Center in 1985. He was the school’s vocational agriculture education teacher for 27 years before retiring seven years ago. In the spring of 2018, McGee, a former bull rider, said he started coughing constantly and had trouble breathing, so he went to the doctor.

“I found out I had lung cancer,” McGee says. “It was stage four. I was never a smoker. When I looked at the average life expectancy, it said six to 12 months. That was hard to take in.”

When the community learned about McGee’s diagnosis, they got to work.

“We knew this would affect the McGee family emotionally, but also financially,” Brilke says. “Ron’s teacher friends and family put together a wonderful benefit for him at The Town Hall. It’s been our biggest event yet.”

The event on Aug. 5, 2018, included a silent and live auction, entertainment, outside vendors and a meal.

“The Town Hall was a perfect location,” McGee says. “We were able to utilize all of the space available, plus some outside. It was a beautiful day with a lot of wonderful people.” 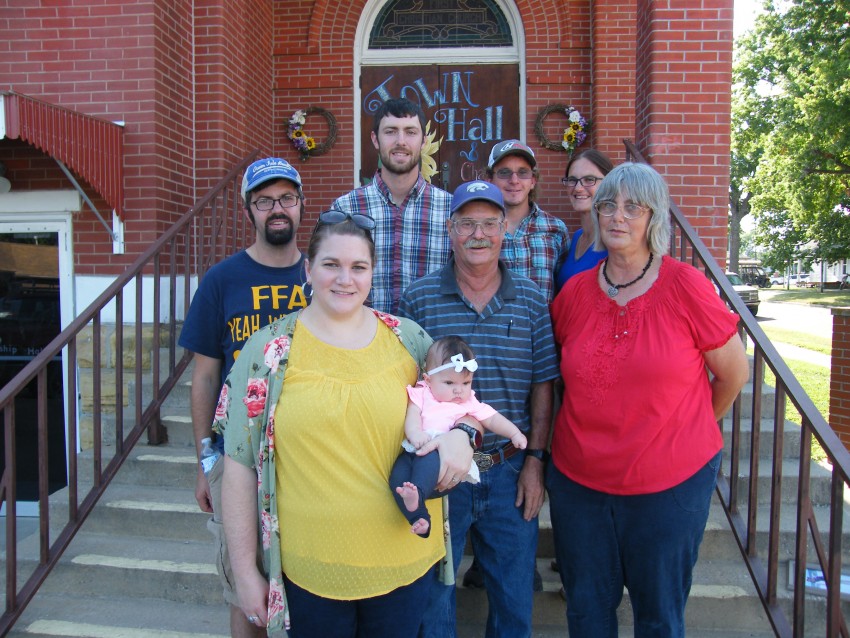 The day after the event was McGee’s 62nd birthday.

“I like to say it was the biggest birthday party I’ve ever had,” McGee jokes. “The financial support I received was icing on the cake.”

“It just brings me to tears,” he says with emotional appreciation. “I am so fortunate to live in a small community and to be involved in the rodeo industry. My friends, family, the people here and the ones I’ve met through bull riding have been a pillar of strength through my fight with cancer.”

With proper medication, treatment and some faith, McGee said he started to feel better.

“I can breathe now,” he says. “My doctor said in December that he’s never seen a scan so good. Some of the cancer was resolved and everywhere else had minimal metabolic activity.”

Although the financial support was appreciated by McGee, he credits his improvement to something else.

“I always say it’s the prayers and the pills working for me,” he says. “I feel like myself again.”

The church has found a new space in the community and a new place in the hearts of residents who are new, seasoned, young and old.

“I walked someone through who had memories of the church,” Kathe Hamman says. “She started crying because it wasn’t what it was before to her. But I reminded her that it’s still a happy place. It’s saved, and it’s not torn down. Those tears of sadness turned into tears of appreciation. We know it’s a little different from before, but there’s still laughter and joy in the hallways.”

Those 16 members who attended church before The Town Hall? They still congregate there once a month.

There are people and locations like this all over Kansas – people who are making great things happen in small communities and keeping the faith alive for rural Kansans. For more information about The Town Hall, visit www.theyctownhall.com.