If you’re like me, there’s nothing better than popping open my favorite beer after a day of hard work. According to the Brewers Association (yes, there is one!) beer sales were flat overall in the United States in 2016, but craft brews grew at a rate of more than 6 percent. So, what is a craft beer?

Our friends at the Brewers Association define them as:

The cool thing about craft beer is many folks get their start experimenting at home. If you’ve ever wondered how it works, I’ve got the details for you here.

Beer is made from four basic ingredients: Barley (or other grains), water, hops and yeast. The basic idea is to extract the sugars from grains so the yeast can convert it to alcohol and CO2, creating beer.

Brewing is a combination of science and art. A brewmaster uses the basic scientific process and expresses creativity by varying the combinations of grains, hops and yeast that results in a multitude of styles.

The first step begins with a cereal grain. Although barley is the most popular, wheat, rye and other grains are also used. Once the grains are harvested, the seeds are run through a malting process. The purpose is to start the seed germinating as if it were going to grow. Germination activates starch enzymes necessary to create fermentable sugars when the yeast is added later in the process.

However, the germination must be stopped at the right time. Grain harvested out of the field usually has 10-12 percent moisture content and steeping (soaking in water) elevates it to approximately 45 percent, causing it to germinate. Left alone, it would sprout roots and grow. Once the germination is stopped, the grains are dried through kilning back to three to five percent moisture content. The last stage is roasting the grains. Maltsters – experts in creating various malted grains – determine the kind of roasting.

Once the grains are malted, the next step is to steep them again in hot water. This process, known as mashing, activates the starch enzymes in the grain, which cause it to break down and release sugar. The water is then drained and leaves a sweet, syrupy liquid known as wort.  However, there are still parts of the grains left and the next step is to lauter, or separate, the wort from the used grains.

Once wort has been created and the lautering is complete, hops and other spices are added. Hops are small pinecone-looking fruit that grows on vines and provides bitterness to balance out the sugar in the wort. Hops contain the acid isohumulone, which is measured in parts per million. The levels of this, and other acids in hops, are referred to as bitterness units. Chemists have created the International Bitterness Unit (IBU), which is measured on a scale of 1-to-100. Generally speaking, the higher the number, the more bitter the taste. Connoisseurs then speak of beer in terms as less, or more, hoppy.

Hops also have a natural preservative quality. For example, the India Pale Ale (IPA) variety – one of the most popular craft beers – originated during England’s occupation of India. Brewers in England put extra hops into the beer to preserve it on the long ocean voyage.

The 2016 value of production of the United States hop crop was $498 million, up 44 percent from the record 2015 value of $345 million. Most hops grown in the U.S. are in the northwest states of Washington, Oregon and Idaho. The most popular types of hops are Cascade, Simcoe, Zeus, Centennial, Citra, Willamette and Mosaic. Like grape varieties that determine the taste of wine, the type of hop and the region it’s grown influence the taste of beer.

After the hops are added and the boiling is finished, the liquid goes to a fermenting vessel and yeast is added. Although there are more than 1,500 varieties of yeast, there are two different types of yeast used for craft beer: top cropping and bottom cropping.

Yeast is a living, single-cell microorganism that is classified as fungi. Once the yeast is added, it begins to break down the sugars and create both alcohol and carbonization (CO2).

Ales are fermented at a warmer temperature around 64 degrees and can be ready to drink within three weeks. In traditional brewing, the yeast used in ales causes a foam at the top of the tank from which it derives it’s name, top cropping (fermenting).

Lager is the German word, “to store.” Lagers are fermented at a cooler temperature around 50 degrees and then stored (lagered) for several weeks or months at temperatures near freezing. The type of yeast used in this process settles at the bottom of the tank and is called bottom cropping (fermenting).

Once the brewmaster determines the beer has fermented, the next step is to fill bottles, aluminum cans, kegs or casks.

What Do Those Letters and Numbers Mean?

Typically, there are two or three letter combinations in the beer list and on the label:

In addition to flavor descriptions and what each measurement unit means, craft beer is also described by appearance, flavor, aroma, mouth feel and after taste. 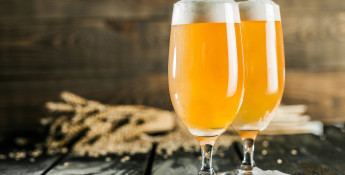