Denny Ashcraft knows slowing down can speed things up 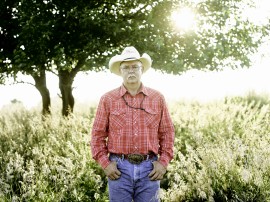 With a whistle around his neck, stock dog by his side and cattle in the distance, the first-generation Kansas rancher opened the gate to the pasture. His sun-soaked eyes never left the herd of 20 or so grazing cows. It was time to bring the girls in.

For movie aficionados who have watched a western or two, rounding up cows conjures images of cowboys yelling, galloping and quickly moving cattle from one spot to another while shouting the occasional “yeehaw.” These scenes are packed full of dust, commotion and the occasional stray that gets separated from the herd, which helps thicken the plot line. As with most things Hollywood, the classic representation is far from the modern truth.

For Jackson County rancher Denny Ashcraft, as with most beef producers, there was no hootin’ and hollerin’, no gallopin’ horses and definitely no yellin’. To many, the round up would be considered rather boring and uneventful; the cows probably felt the same way. Standing just feet from the gate, he gave his dog a look and it trotted over toward the uninterested cows.

Slowly, calmly and with great control, the Border Collie began to walk among the cows. There was no biting and no barking. The movement was more the result of a mutual understanding than intimidation or aggression. If the cows needed to change course and turn left or right, Denny would simply puff on his whistle, the dog would respond and the cows would acquiesce and change direction. After a few minutes of silent migration, the cattle arrived to their destination just as calmly as they were grazing the fields before Denny walked through the gate with his dog. Denny was calm. The dog was calm. Most importantly, the cattle were calm.

The idea of handling cattle in a calm way is what beef producers call “low stress handling.” Although this may seem like a new term to many, the concept has been popular for decades. Stressed cattle are more difficult (and dangerous) to handle and often require more time than a herd that is relaxed. For many ranchers, whether they handle cattle with a dog, on top of a horse, or on an ATV, they know that slowing down can speed things up and make their job more enjoyable.

“It’s probably boring to watch as a spectator but there’s a certain amount of fulfillment and pride that comes from handling your cattle calmly and patiently,” Denny says. “If I go out and gather my cattle, I never go out there and think I won’t get the job done. The cattle are happy to move as long as they’re treated right and quietly.”

Aside from being more relaxing on the rancher, low-stress handling is better for the cows, which results in more profits for the rancher. When cattle are stressed their heart rates are elevated, their immune systems are compromised and their appetites are decreased. All of these symptoms of stress result in lower profits.

“It’s a business,” Denny said. “We need to sell every pound of beef that we can. The best way to do that is to handle your livestock quietly and reduce stress. In a way, it’s a financial decision, but we really enjoy treating our cattle right.”