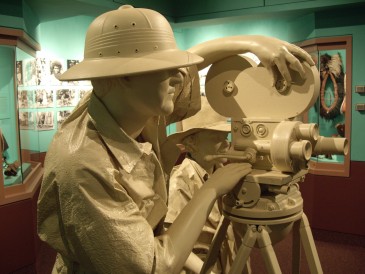 To some, the story of Martin and Osa Johnson may seem more like a fantasy than reality. Osa, originally from Chanute, and Martin, raised in Lincoln and Independence, were married in 1910. Their love story is unique and involves adventures in Africa, Borneo and the South Pacific.

Not only did they explore these locations, they documented their adventures with film and photographs.

“These Kansans captured the public's imagination through many movies, such as Simba and Baboona, and best-selling books including the classic zebra-striped I Married Adventure,” says Conrad Froehlich, director of the Martin and Osa Johnson Safari Museum. "Martin and Osa popularized camera safaris and an interest in wildlife conservation for Americans and  people worldwide. Their legacy is a record of the animals and cultures in remote areas of the world which have undergone
profound changes.”

It continues because of the dedication of Osa’s mother, Martin’s sister and the Chanute Chamber of Commerce. In 1961, they officially opened the Martin and Osa Johnson Safari Museum in Chanute. The museum features award-winning
exhibits and highlights the Johnsons’ achievements. The museum also offers educational programs for children and adults, making it a perfect place to take the entire family.

Additional exhibits feature the rich culture and art of Africa. A collection of more than 2,000 photographs from other prominent explorers is also available for viewing.

“Visitors will find carefully planned exhibits, a range of education programs and a helpful staff of professional employees and volunteers,” says Froehlich.

The exhibit areas and Osa's Ark Museum Store are open to the public Tuesday through Saturday from 10 a.m. to 5 p.m. and Sunday from 1 to 5 p.m. As a non-profit, the museum charges admission to help cover operating expenses.