The importance of fast, reliable internet in rural areas

For those of us living in a city, broadband internet is almost omnipresent. Wherever we go — from the office to the store to home — we’re connected through computers, smart phones, TVs and countless other devices. For our counterparts in rural Kansas, however, that’s not always the case. The reliable, high-speed connections we take for granted in the city are few and far between in the countryside.

The coronavirus pandemic has made clear the importance of a reliable internet connection as it has been the way we are able to connect, learn and do business. The frustration of unstable connections is felt by rural Kansans all too often.

Broadband is critical for farmers, ranchers and rural business owners to keep doing the jobs they love. Linn County farmer and rancher Tim Tyson says his internet connection at home is so slow he can just barely stream movies and TV shows, but even that requires some effort. Cellular coverage isn’t much better, and he regularly has calls drop in midsentence.

Tyson also runs an aerial imaging company and the lack of connectivity puts a crimp in his work.

“The other day I took 800 images,” Tyson says. “To upload those, it took me two days. It should have taken a matter of hours. Sometimes they won’t even upload. It’s just too slow.”

Tyson says cellular-based broadband isn’t an option for his business because transferring photos that way compresses the images, meaning they lose data and show up in a lower resolution.

The flow of information on the internet is measured in megabits transferred per second, or Mbps. The Federal Communications Commission (FCC) says to be considered broadband, a connection must be able to download 25 Mbps and upload 3 Mbps. Nearly 40 percent of rural Americans lack access to such a connection, compared to just four percent of urban dwellers.

The only option for Tyson, who lives less than an hour away from the Kansas City suburbs, is a DSL connection, which is slower than cable or fiber. He says his download speed tops out at about 3 Mbps, and he can upload files at 0.5 Mbps.

“If I hook my TV up straight to the modem, and I don’t go through my firewall, I can stream Netflix or Amazon Prime,” Tyson says. “If I go through the firewall, I can’t, because it slows it down a little bit.”

That’s just one example of how Tyson’s internet connection limits his ability to participate in today’s online world. However, he’s still more fortunate than some. A 2017 U.S. Department of Agriculture (USDA) report found 29 percent of U.S. farms have no access to the internet.

Kansas Gov. Laura Kelly and Lt. Gov. Lynn Rogers created the Office of Rural Prosperity in 2019 to streamline rural policy, create an inventory of resources and aid rural improvement efforts. Rogers visited 44 towns in 23 counties across the state on a listening tour, and one of the recurring needs mentioned was access to quality, affordable broadband.

Broadband access lets farmers and ranchers efficiently manage their resources to optimize yields, lower their impact on the environment and boost profits.

“I see a future, not very far off, where you could be out on the tractor and upload a map to your agronomist,” Tyson says. “At this point you can’t do that. Your near-real time data transfers, making decisions on the go, are not available right now.”

Tyson says he sees two immediate benefits of expanding broadband coverage to rural areas. He says broadband access would offer a way for businesses to locate in a rural setting. It also would allow younger people the opportunity to return home after college and telecommute to a job elsewhere.

Current and future rural Kansans fear not only missing out on the business opportunities provided by broadband access, but also the ability to tap into health care and educational services and participate in global conversations from the comfort of their living rooms.

The good news is, there’s already a template and funding mechanism in place to deliver fast, reliable internet connection to the countryside. Rural Americans were in a similar situation in the 1930s when electricity was changing the lives of people living in urban areas.

The Rural Electrification Act of 1936 was enacted to create electrical systems in areas private companies deemed too sparsely populated to be profitable. The federal government provided loans and other funding through local cooperatives that developed their own transmission and distribution lines. A similar process was used to extend telephone service.

While the template exists, it needs to be modernized to build out broadband networks. Projects receiving federal funding need to meet the FCC’s requirement of speeds not less than 25 Mbps/3 Mbps through any source, including wireless.

Tax incentives, grants and regulations, or a combination of the three can help. Policies should also encourage providers to better coordinate and share their current assets for the installation of new infrastructure.

Tyson says these tools are exactly what’s needed to help connect businesses like his. He says there’s a plan that calls for a high-speed fiber optic cable in front of his house, but there’s no timeline for when it will be installed.

The FCC and USDA each have programs to encourage investment through tax incentives, loans and grants, but they’ve had limited success connecting everyone.

Tyson knows broadband connections are a necessity for all Kansans and believes faster internet will strengthen communities and enable farmers and ranchers to become even more productive.

“People will use it more, and there’s no doubt in my mind it will be a good thing,” he says. 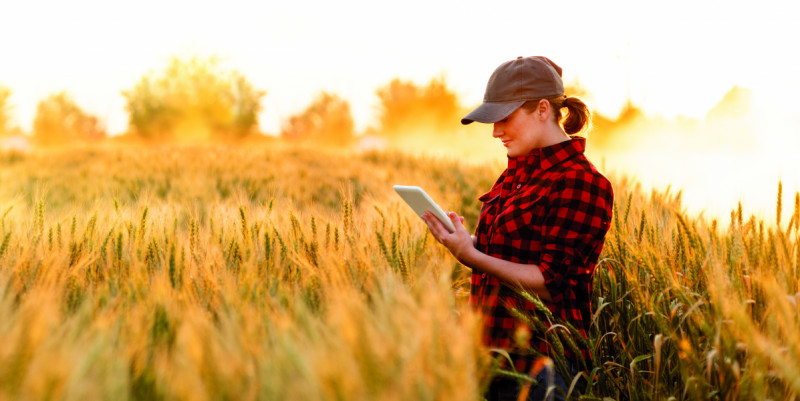