The smallest things have the biggest impact precisely because they are beautiful, selfless, giving.

For all he’s seen over the past few weeks, the donation of a single N-95 mask could have easily been overlooked by New York Gov. Andrew Cuomo.

Instead, it made a lasting impression.

Accompanying the mask was a letter from Dennis and Sharon Ruhnke. Cuomo read the letter in its entirety during a press conference on April 24. 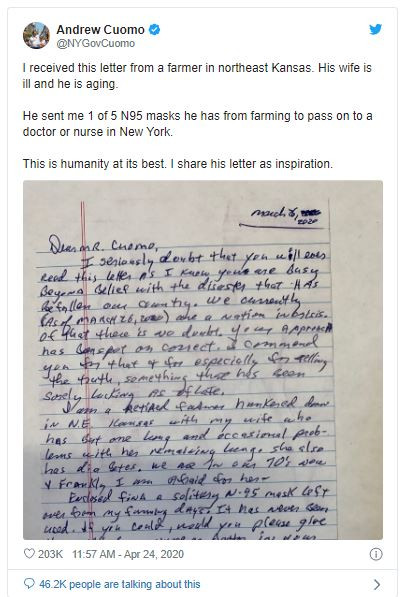 “I am a retired farmer hunkered down in N.E. Kansas with my wife who has but one lung and occasional problems with her remaining lung,” the hand-written letter from Dennis reads. “We are in our 70s now and frankly I am afraid for her.”

Dennis went on to say he found five masks left over from his farming days. Sharon says he used them when cleaning out grain bins that held the corn and soybeans he grew. He kept four for his family, but the fifth one went to the governor to give to a doctor or a nurse in New York.

From her home near Troy, Sharon, who retired after 45 years of teaching, says she didn’t know Cuomo had read the letter until her son called later that afternoon.

“He said, ‘I knew that was you because of dad’s terrible handwriting,’” she says.

Sharon says her husband checked that a niece who’s a paramedic in Atchison had enough masks before boxing up the one they didn’t need. He sent it to the governor because that’s the first address he found on the internet.

“We try to give back as much as we can,” Sharon says. “We help out if we can. We don’t have a lot, but we’ll share what we have. We’re just thankful that one nurse is going to be able to have the proper mask.” 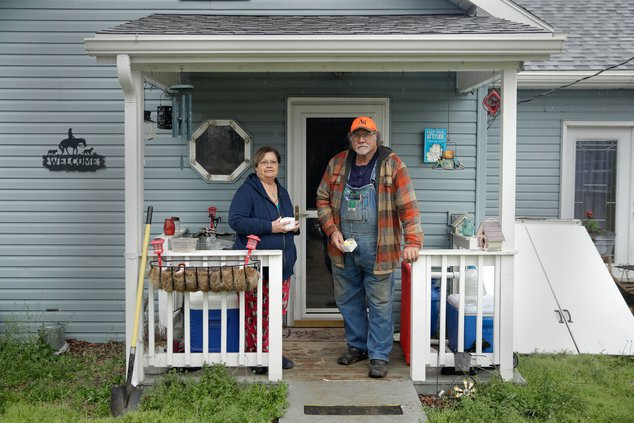 Dennis Ruhnke and his wife, Sharon, stand on the front porch of their home near Troy, Kan. . Dennis, a retired farmer, shipped one of the couple's five N-95 masks to New York Gov. Andrew Cuomo for use by a doctor or a nurse CHARLIE RIEDEL/AP/SHUTTERSTOCK

Sharon says she and Dennis are fortunate to have the support of friends and family to help with grocery shopping and running errands, so they don’t have to risk their health by going out. Still, times are tough for everyone.

“I’m not going to the museum and donating my time,” she says. “I miss my grandkids so much. My little granddaughter, she’s 2, and it’s hard for her to understand why she’s kissing grandma through the patio door.”

The attention the letter has garnered is a pleasant distraction though.

“I was so moved by a text I received from someone in New York,” Sharon says. “They thanked us for the mask and asked if we needed anything. Their problems are just unbelievable … for them to even think we needed something or think of sending us anything made us feel so grateful.”

For his part, Cuomo called the mask and letter a “snapshot of humanity.” 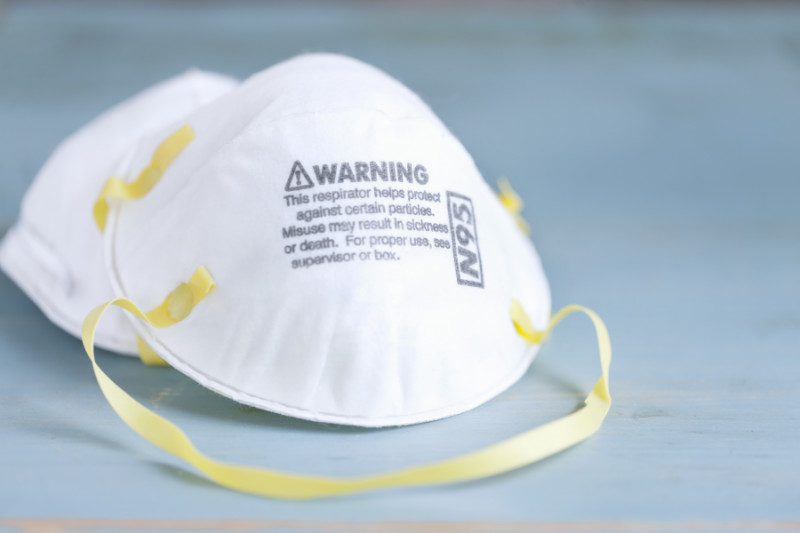