Are you looking for someone to tell you the truth about meat alternatives and whether cow flatulence is to blame for climate change? Would you trust a mom who feeds her child the same beef her family raises? Then let me introduce you to Brandi Buzzard Frobose, a Kansas cowgirl who raises beef cattle along with her husband, Hyatt, and daughter, Oakley, on High Bar Cattle Company ranch near Greeley.

"I have a stronger tie to the grocery shopper now that I have a child,” Brandi says. I want to look that mom in the eye and say, 'I know how you feel, I want to make sure my kid grows up to be healthy, strong and smart and this is what I feed my kid so if I feed this to my kid, you can too.’" 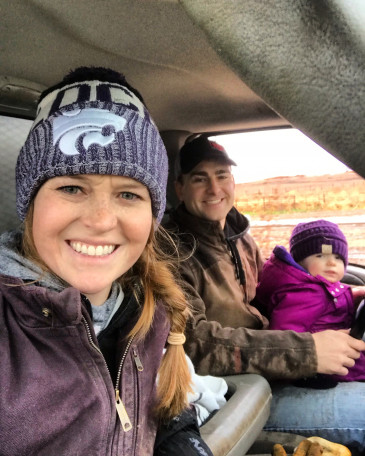 Brandi grew up on a small hobby ranch in southeast Kansas where she developed her love for the cowgirl life. She showed cattle and pigs at the county fair and traipsed around the county with her dad and grandpa to help other ranchers work cattle. Her favorite sport is breakaway roping in rodeo, which she still actively competes in.

“I love rodeoing and riding horses,” Brandi says. “I also love cows. I have the best of both worlds in that I still rodeo yet have an opportunity to talk about cattle all day.”

It’s her love for talking about cattle all day that has launched Brandi into a national spokesperson for the beef industry. On one hand, she does it professionally in her role as Communications Director for the Red Angus Association of America. She was recently awarded the Masters of Beef Advocacy Advocate of the Year by the National Cattleman’s Beef Association. 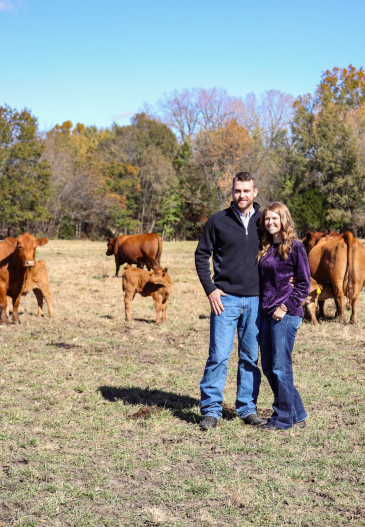 On the other hand, she does it personally on her blog, Buzzards’ Beat, which also drew national attention when she posted her Open Letter to Congresswoman Alexandria Ocasio-Cortez from a Kansas Rancher. She penned the letter in response to the claims that methane produced by cow flatulence is a major culprit in climate change.

“I wrote the letter because I wanted to have a conversation with her,” Brandi says. “Although I don’t agree with a lot of her policies, I do admire her for becoming a Congresswoman. I wrote the letter, slept on it and wrote it again.”

Brandi’s respect is evident throughout the letter. In fact, in conversation with Brandi, she refused to call the Congresswoman, AOC, which is a nickname she’s acquired.

“She’s Congresswoman Ocasio-Cortez,” Brandi says. “She’s earned the right for me to call her that and to be treated with respect. It’s easy when someone attacks your profession to lambast them. I wanted to have a conversation with her, invite her to the ranch to help her better understand what we do on cattle ranches."

Brandi’s challenge was to ensure the Congresswoman actually received the letter. Congressman Dr. Roger Marshall’s office came to her aid and was able to deliver the printed letter to the Congresswoman’s office.

“I don’t know if she ever read it, but I decided to put it on my blog and maybe someone else could benefit from reading it. Within a few hours, my site crashed because so many people were reading it. We fixed it, then it crashed again. More than a quarter million people have read the letter.

“Then I received a DM (direct message) on Instagram from a guy named Vaughn Hillyard wanting to talk to me. I didn’t know who he was and had to Google him to find out he was with MSNBC. I thought, ‘Oh my, this is much bigger than I expected.’”

Hillyard and his crew made arrangements to visit her ranch.

“The temperature dropped 30 degrees in a few hours while they were here,” Brandi recalls. “I showed them our cows, talked about sustainability, reducing food waste and how cows and agriculture can actually help with climate change, rather than cause it. They were really nice people. They came back the next day and we had bacon for breakfast while a blizzard rolled in waiting for the segment to air.”

“My hope is that someone who read the blog or watched the interviews were able to have their questions answered about what we do,” she says. “If you can reach one person, and that one person talks to their family, you can make headway one person at a time.”

Brandi’s goal as a communicator is to reach “the movable middle.”

“We’re not going to change the minds of the people on the extreme edges,” Brandi says. “Their minds are made up. However, there are people in the middle who have genuine questions. It’s easy for us in agriculture to get defensive when people start questioning us, but most of the questions are from people who genuinely want to know what we do.”

It’s easy to understand why people listen to Brandi. She’s intelligent, quick witted and, most of all, respectful of other peoples’ points of view. However, it’s her ability to articulate the complexities of her industry in simple terms that is most appealing. In her posts, A Burger Won’t Negate an Airplane and What You Didn’t See During My Sustainable Beef Interview with MSNBC, she makes complicated facts practical and easy to understand.

For example, in her blog, Changing Your Diet Won’t Help the Environment but These 5 Changes Will, she writes, "The fact of the matter is if I went vegan for one whole year (that sounds atrocious, by the way), I would only reduce my carbon footprint by one half of one flight across the Atlantic.”

Brandi’s path to becoming one of the most respected voices in agriculture did not begin with that goal in mind. After high school, she attended Fort Scott Community College on a rodeo scholarship then on to Kansas State University. There, she continued to rodeo while pursing undergrad degrees in animal science and agricultural economics and a master’s in animal science and animal welfare. 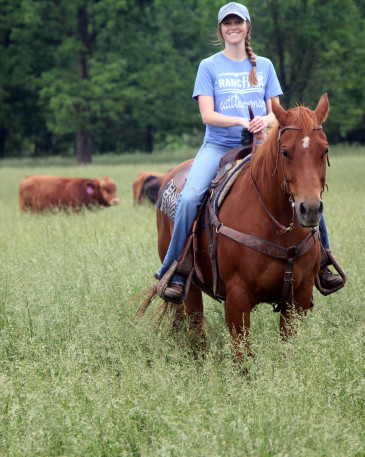 Along the way, she decided to become a writer with the belief that her words could articulate the passion and excellence of people in agriculture.

“I started freelance writing in 2009,” Brandi says. “I sent out 25 requests to various publications and received 24 'nos.’ If you notice, I have no ag communication or journalism background. That might have made it easier, but I’ve learned it’s about hard work. Some people say I’m lucky, but to me, hard work looks a lot like luck. What someone thinks is luck is someone else overcoming a lot of ’no’s’ and pressing on.”

Brandi encourages others in agriculture to start writing in effort to reach that movable middle and tell their story of agriculture.

“When I started writing, I just wanted my words out there. Nowadays, it’s easy to start a blog and use social media to reach a new audience. If you love to write, you can find somewhere to put it.”

In a casual conversation with Brandi, you would never know of her national acclaim. She doesn’t like to talk about herself; she would rather talk about her daughter, her cows, her horses, her ranch and your food choices.

If you are looking for someone you can trust to tell you the truth about beef - and other food choices - I suggest you follow Brandi. Read her words. Invite her to speak. Interview her on your podcast. It will be a most enjoyable and educational use of your time.

If you don’t know what to say to her, just ask her about cows. She loves to talk about cows all day. She will mesmerize, inform, inspire and most of all, make you fall in love with cows, too. 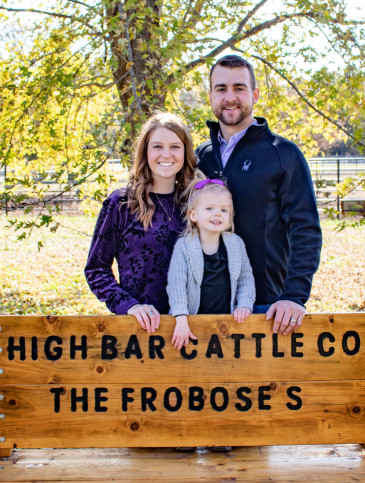