This family’s pumpkin ranch has grown into a place for fun, laughter and learning beloved by many families — including their own.

Tim and Jamie Kaminkow of Moundridge have a great marriage, two beautiful daughters, and had good jobs. They consider themselves fortunate, but they wanted just one more thing: to work together each day, side-by-side, as a family.

“Jamie and I both grew up on farms and there was always something you could do to help your parents,” Tim says. “We wanted to give our kids that same experience and teach them the value of hard work. I was working long hours and away from the family too much. We started the ranch so we could work together.”

The Kaminkows began P and M Pumpkin Ranch six years ago and named the ranch after their daughters, Paityn and Macy, who are now 14 and 11, respectively. Located six miles west of Moundridge and half a mile north, the Kaminkows plant approximately 10 acres of pumpkins and gourds each season.

“I grew up on a farm near Inman and Tim grew up on a Christmas tree farm in Maryland,” Jamie says. “We grew up working with our families on a farm and we missed that.” 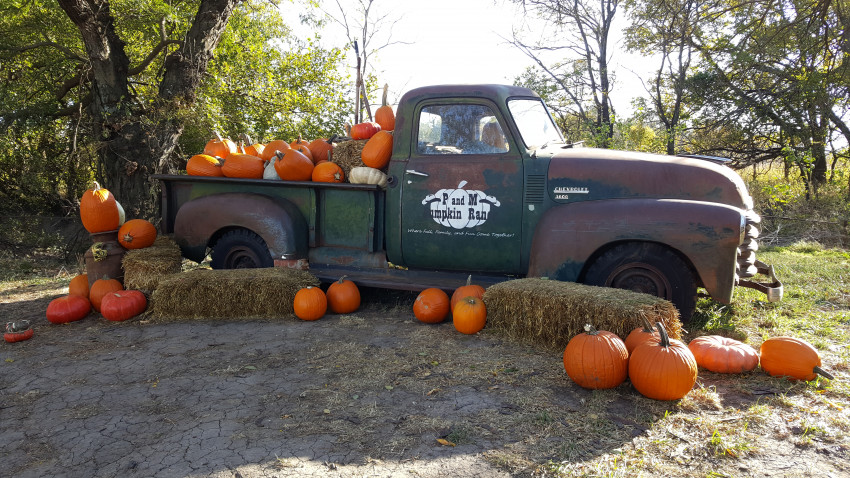 In order to begin an agri-tourism or agrientertainment business, there are licensing requirements both from state and local governmental agencies. Tim and Jamie got to work to learn how they could incorporate a pumpkin patch on 54 acres of farmland they had purchased in 1999.

“The McPherson County Commissioners were very supportive,” Jamie says. “They saw this as a great way to introduce people to agriculture. They also wanted to make sure we had a pumpkin cannon; if we promised them the visitors could shoot pumpkins out of our cannon (safely), then they were on board with all of it.”

Nationally, pumpkin production for commercial use such as pie filling has been in a slow decline the last two years because of flooding and cold weather. However, the growth of consumers wanting the pumpkin patch experience has created a niche industry because people want to pick their own pumpkins rather than purchase them as a retail item.

“I swore if I started another business after years in construction, it would not be weather or time-sensitive, but growing pumpkins is the worst of both,” Tim jokes. “Our lives revolve both around Mother Nature and the time when the pumpkins ripen.”

Although pumpkins can be fickle to grow, they are great for pollinators.

“Our biggest friends are the bees,” Tim says. “Sometimes in the morning, the patch is literally humming with bees. The more bees, the more pumpkins!

“However, our biggest nemeses are mice. They chew the plastic on our drip irrigation, eat the seeds after we plant and hollow out pumpkins to make their homes in them. If you pick up a pumpkin and it feels really light, a mouse has cleaned it out.”

“Oh, and you can’t forget the weeds,” Jamie jokes. “Macy hates pulling weeds and we’ll hear her complain about why Adam and Eve had to eat that apple.”

A PLACE FOR FAMILY

“We didn’t see this when we first started,” Tim says, “but we've discovered the people who come here do it as a family. So we make this a family experience; we create fun things for the parents to do, too.”

“Yeah, like the 92-year-old grandpa who went down our slide hill not just once, but three times,” Jamie laughs.

To accommodate families, the ranch has large areas with fi re rings and picnic tables, which can also be rented for private events and parties.

“Now that we’ve been here a while, the young couples who started coming when we were first open are having babies so it’s like we’re growing together,” Jamie says. “Paityn and Macy have made a lot of friends through the years who now look for them when they come out.”

AN OPPORTUNITY TO LEARN

Th e pumpkin ranch is a popular destination for public and home schools in the region, so Jamie designed a curriculum for different age groups; “Pumpkin Sprouts” for young kids and “Protect the Patch” for older ones.

“We want kids to understand what it takes to be a farmer,” Jamie says. “We're open during the season for students Tuesday through Thursday. For the young kids, we talk about the varieties of pumpkins and how they grow. We also talk about good bugs and bad bugs.

“For older kids, we create an imaginary situation where they have to go out into the patch and fix what's wrong. We use this to teach them how to be a good farmer and that things happen which are simply out of our control.”

THE GROWING POPULARITY OF THE RANCH

“We were so nervous our first year that no one would come,” Jamie says. “We put up a lot of signs around the area. The guy at the Lowes store finally asked, 'What are you doing with all this orange paint?'”

“My dad was a believer in road signs,” Tim says. “We put a big one up along I-35 and one couple stopped in who were from Europe and traveling across the U.S. I've never seen anyone have as much fun. They were literally frolicking through the pumpkins.”

The signs seemed to have worked their magic. Over the years, the Kaminkows saw more and more people visiting their pumpkin ranch.

“We have been astonished by the growth,” Tim says. “One of our mentors is a farmer from Nebraska and he told us to honor our guests by reinvesting back into our farm. We've added a lot of buildings and attractions through the years.”

Some of those buildings and attractions include the P and M Sports Barn, Grandpa's Town, Miner Mike's, Cookie's Canteen, Cookie's Corn Crib and the Outlaw Arena where the pig and duck races are held.

You can build and build, but if a patron doesn’t feel welcome, they won’t come back.

“We try to thank each person who comes,” Jamie says. “Last year, a big burly guy took his family to the parking lot then came running back and asked, 'So what cool things are you adding for next year?' We always have a two-year plan so I told him and he got as excited as a little kid.”

RACING OF THE PIGS

One of the fun things that keeps people coming back doesn’t have much to do with pumpkins, but is a fun way to interact with visitors. They are the Outlaw Oinkers pig and Cookie’s Crazy Quakers duck races. The races occur Tuesdays through Thursdays at 5:30 p.m. and Fridays through Sundays at 12:30 p.m., 2:30 p.m. and 5:30 p.m. But to keep it fair, the pigs and ducks race separately.

“We have been surprised by how popular the pig and duck races are,” Jamie says. “People will go sit in the bleachers 30 minutes before the race to make sure they have a good spot.”

“I dress up in the pig costume during the pig races,” Macy says. “Little kids like to hug me and get their picture taken with me. But I’ve learned not to take it off in front of really little kids; it makes them cry.”

Although there is a misconception that large corporations are taking over farming, the fact is 97 percent of all farms in the U.S. are family farms. The ability to work side-by-side each day is important for these families.

“Tim’s parents come in from Maryland a few weeks before we open and stay until a couple of weeks after we close to help out,” Jaime says. “My mom comes every day during that time, too. It’s great to see our kids work with their grandparents.”

“We employ about 60 people during the summer and fall season,” Tim says. “Our girls love getting their paychecks right along with everyone else. When our girls want something, they don’t come to us with their hands out; instead, they ask us what they might do extra to earn money for something they want.”

Family farms include everyone in the day-in, day-out, and they work side-by-side to make the farm work.

“We’re always thinking and talking about the ranch,” Paityn says. “When my agriculture class in school was deciding on a project, I said, ‘Hey, why don’t we do our ranch?’ They thought that was a great idea.”

“We had an inventors fair in fourth grade last year, and my invention about using sticky tape to hold our bags in place in the trash cans won a prize," Macy says. “We talk all the time about adding new things. But I really don’t like pulling weeds.”

Furthermore, passing on the farm from one generation to the next is a desire so intimately woven into their DNA that it serves as a badge of honor. When you meet a farmer or rancher for the first time, they often include their generational level; they are first-generation, second-generation, or third-generation farmers, and so on.

For farmers and ranchers, it’s more than just having children follow the same career path; it is about working together, divvying up responsibility, sharing the workload, struggling through hard times and celebrating the good ones. Regardless of what they are doing, it is important they are doing it together.

If you make it to the P and M Pumpkin Ranch, you will experience what I did; at first approach it looks like any other farm or ranch along the way. You can’t see the pumpkin patch because of the topography.

“Yeah, when people pull up they must think this looks like a dairy,” Macy says. “So, they probably say, ‘What are we doing here? Are we going to milk cows today?’”

When you crest the hill and see the valley below, you’re welcomed to the sights, sounds and smells — like fresh kettle corn. And while you’re walking through the pumpkins, feel free to pull a few weeds. Macy would appreciate the help.

There are several pumpkin patch experiences to enjoy in Kansas. The P and M Pumpkin Ranch is at 311 16th Avenue, Moundridge, and is open Tuesday through Thursday, 4p.m. to 7 p.m. and Friday through Sunday, 10 a.m. to 7 p.m. starting Sept. 21. They are closed on Monday. For more information, visit their website www.pandmpumpkinranch.com.

See below for a list of more pumpkin patches in Kansas! 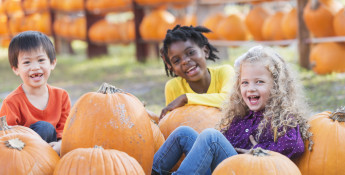