What’s your mental picture of a farmer? Is it an old guy in a pair of blue jeans, a flannel shirt and a little barnyard on his boots? That was mine for many years until I started writing their stories three years ago. Boy, was I wrong.

Sure, some of them wear blue jeans and sometimes have a bit of barnyard on their boots, but don’t let that fool you. They are highly educated scientists, CEOs, financial gurus, international trade experts, entrepreneurs, engineers, carpenters, mechanics and artists. They are not just good at only one thing; they are experts in multiple disciplines.

Matt and Mindy Young of rural Lancaster are one such farm couple. Along with their daughters, Maci and Mylee, this young farm family taps into every fiber of their creativity to not only survive, but also thrive, in this difficult farm economy.

“I’m a fifth-generation farmer,” Matt says. “We trace our family’s roots back to the 1860s. Our family has made it through some hard times and so will we. We’ll do whatever it takes.”

Whatever it takes. Whether it's a multi-generational family farm or a new venture, farmers are relentlessly creative and adaptable to change. Matt’s ancestors broke ground with a horsedrawn plow; now he uses motorized farm equipment and state-of-the-art livestock and seed genetics.

The Youngs are neither alone nor unique; they represent the younger generation of resourceful farmers and ranchers who do whatever it takes to make a living — and a life — on the farm. Here are a few characteristics they share in common.

President Lincoln understood the importance of agricultural education and introduced the concept of Land Grant colleges in 1862; Kansas State University is one such entity. As the industrial revolution pulled more people off the farm and into the city, he perceived the disconnect between citizens and those who grew their food.

Most of the farmers I meet have at least a four-year degree and many have master’s and doctoral degrees.

“I met Matt at K-State,” Mindy says. “He was studying agricultural economics and I was working on my degree in animal production. After we graduated, I went to Oklahoma State to study agricultural communications. We knew if we were going to carry on the tradition of this family’s farm, education was the key to our success.”

“After seven years as an extension agent, I decided to resign that position and stay at home,” Mindy says. “That was much more difficult than I imagined. I began a blog as a way of helping me stay focused as well as helping others who want to live the rural lifestyle.”

Mindy’s website, FarmFitLiving.com, provides several resources on farmsteading, gardening practices, how to eat what you grow, rural lifestyle hacks, how to start backyard businesses and wellness tips for both mental and physical health.

“My most popular topics are beekeeping, gardening tips and mental health,” Mindy says. “The rising suicide rate among farmers and ranchers is nothing we want to talk about publicly, but privately, people reach out to me about their struggles and I use my blog as way to give them hope and help.”

To add to her impressive blogging platform, Mindy recently began a podcast titled Rural Women Inspired. In her podcasts, she interviews other rural women who are leaders in agriculture or their community.

Another way the Youngs adapt is through personal and professional growth opportunities afforded them through Kansas Farm Bureau’s Young Farmers and Ranchers (YF&R).

This group of individuals are hardworking agriculture professionals dedicated to developing leadership skills and empowering others to become actively involved in agriculture advocacy, promotion and education.

These farmers and ranchers fall between the ages of 18 and 35.

“Our family has always been Farm Bureau members, but eight years ago one of our local farmers suggested we attend the YF&R conference,” Matt says. “We’ve learned a lot through that program about leadership and networking and how crucial that is to our success. What we learn at those state and national meetings we take back into our local communities and on our farm.”

Matt and Mindy won the Kansas YF&R Excellence in Ag Award in 2018. That honor gave them the opportunity to compete at the National Farm Bureau Convention in New Orleans earlier this year. 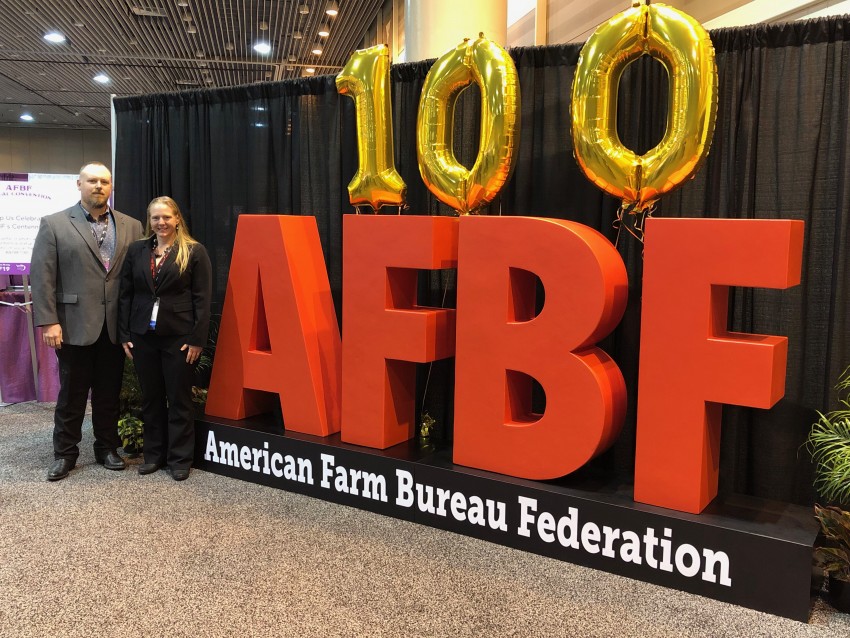 “We had to choose three issues in agriculture and we chose finances, mental health and consumer outreach,” Matt says. “A lot of the work I do each day as an extension agent involves financing for farmers, and what Mindy does on her blog focuses on mental health, so we made consumer outreach the major part of our presentation.”

Both as a business opportunity as well as a way to connect with the community, Mindy began a Community Supported Agricultural (CSA) program.

“I have a two-acre garden,” Mindy says. “With our CSA, we have customers who sign up to have whatever is ready to be harvested that week delivered to them or they can come to the farm and pick it up. This gives me another opportunity to tell people about what we do and provide recipes for using our produce.”

Another way the Youngs are intentional in connecting with the public is through exhibiting livestock and garden produce at county fairs and the state fair. The awards they win in each category have been great conversation starters with people who want to know more. They encourage their children to participate in these competitions and have discovered they are great spokespersons for their livestock and produce.

Mylee, the five-year-old, is already showing goats in national competitions. 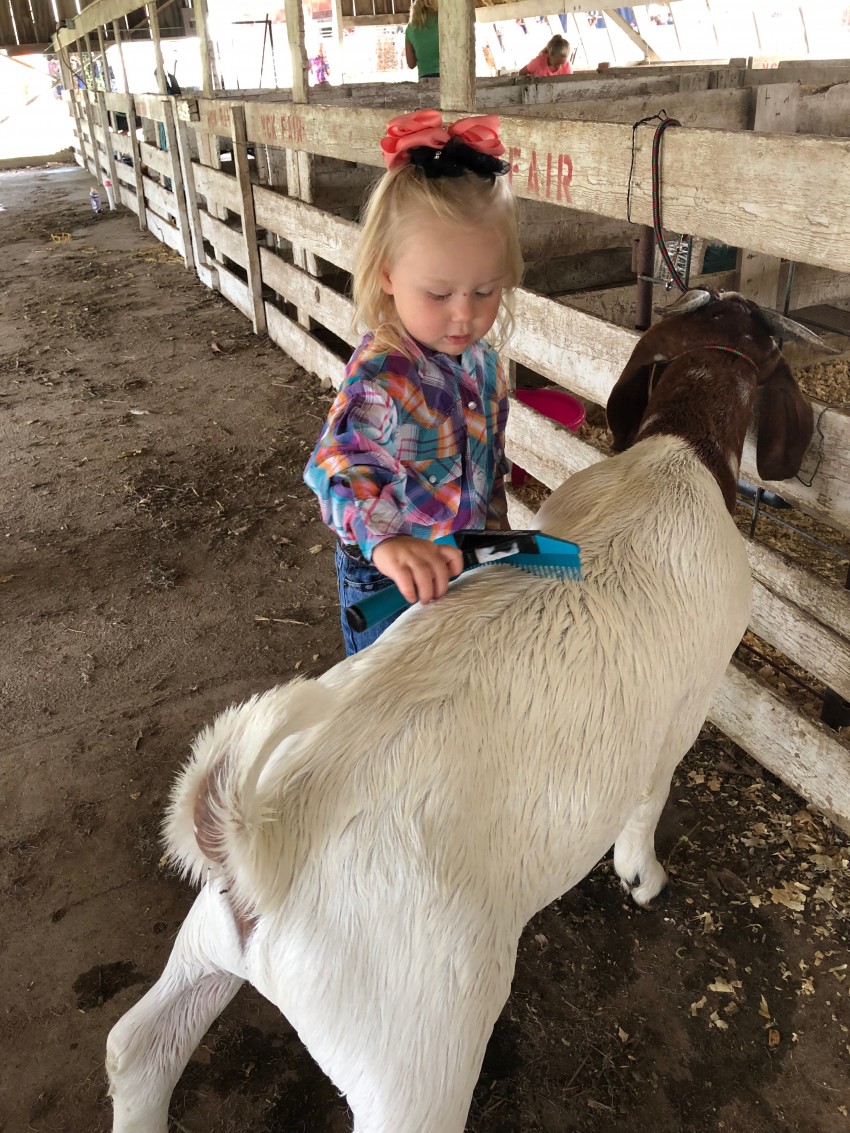 “The major way we connect with our consumers is through the farmers market,” Mindy says. “But Facebook, Instagram and Snapchat are also mediums where we can post information they might find useful, such as videos and stories about what is happening on the farm.”

“One of the difficult things to deal with is ‘Shiny Object Syndrome’,” Matt jokes. “When the price of our crops drops to a quarter of what it was just a couple of years ago, we have to come up with different ways to make money. ‘Shiny objects’ are those things that look good, but we have to ask ourselves this question, ‘Will this help us five years down the road?’ We have to take a lot of risks in farming.”

“Sometimes it’s like throwing spaghetti on the wall to see if it sticks,” Mindy says. “But that’s what all entrepreneurs have to do, isn’t it?”

One market they have identified for potential growth is for sheep and goat meat. Since most of that meat is imported from Australia, the Youngs are part of state and national efforts to meet the increasing cultural and culinary demand for the meat. They raise hair sheep — sheep that are not shorn for wool but known for their quality of meat.

TRAINING THE NEXT GENERATION

As the Youngs adapt to the changing world of agriculture, they are intentional in their desire to pass on their passion to their children.

Mylee competes in showing lambs and goats and recently took second place for her speech in the Pee-Wee division of the Junior American Boer Goat Association National Show. (Yes, a five-year-old placed in a national agricultural speech contest.) Now, Mylee helps train her sister, Maci, to show lambs and goats. This is how it works with farm families: they all help each other.

THE WIDENING GAP BETWEEN RURAL AND CITY LIFE

Most of us understand there is a difference between farm life and city life. We say people live in the city or people live on the farm. Farming and ranching are not a career for people like the Youngs; it is a way of life, something so intricately woven in their being that they simply cannot imagine doing anything else.

Therefore, they will do whatever it takes to make a living — and a life — on the farm. If you don’t believe me, just ask Mylee.