Swimming, barbecues, boats and tans are big parts of the summer scene in Kansas. For Jenny Kelly, a native of Sedan, summer is about lures, poles, her bass boat, ponds and getting to tell that next big fish tale.

Kelly says she began fishing when she was first able to walk — literally. Her grandpa took her on a fishing trip with her parents before she turned two years old. She remembers her first fishing pole decorated with Snoopy emblems for her birthday as a toddler. Kelly says she snagged one of the biggest fish she’s ever caught with that little pole on a private pond.

“The fish dragged me into the water before my folks could help me,” Kelly says. “My mom gave me a dinky lure and told me to have fun, and when the fish bit and pulled me, I started yelling for my mom. She was reeling in a fish at the time, saw me sliding, threw her pole down and came over the dam to help me.”

That fish was a seven-pound bass. Now, 20 years later, fishing is Kelly’s number one pastime. She’s even been known to take a pair of shorts and a hat to work with her to be able to hit the water after her full-time job as the Chautauqua County Farm Bureau coordinator. And of course, she carries a pole at all times, even in the winter.

“Whenever I see a farm pond, I ask myself ‘Hey, can I fish this one?’” she says. “Usually I know the land owner and I always get permission, but my family has a lot of acres with about 10 ponds. And there’s a watershed in Oklahoma on my granddad’s land. I also go to Cowley lake all the time.” 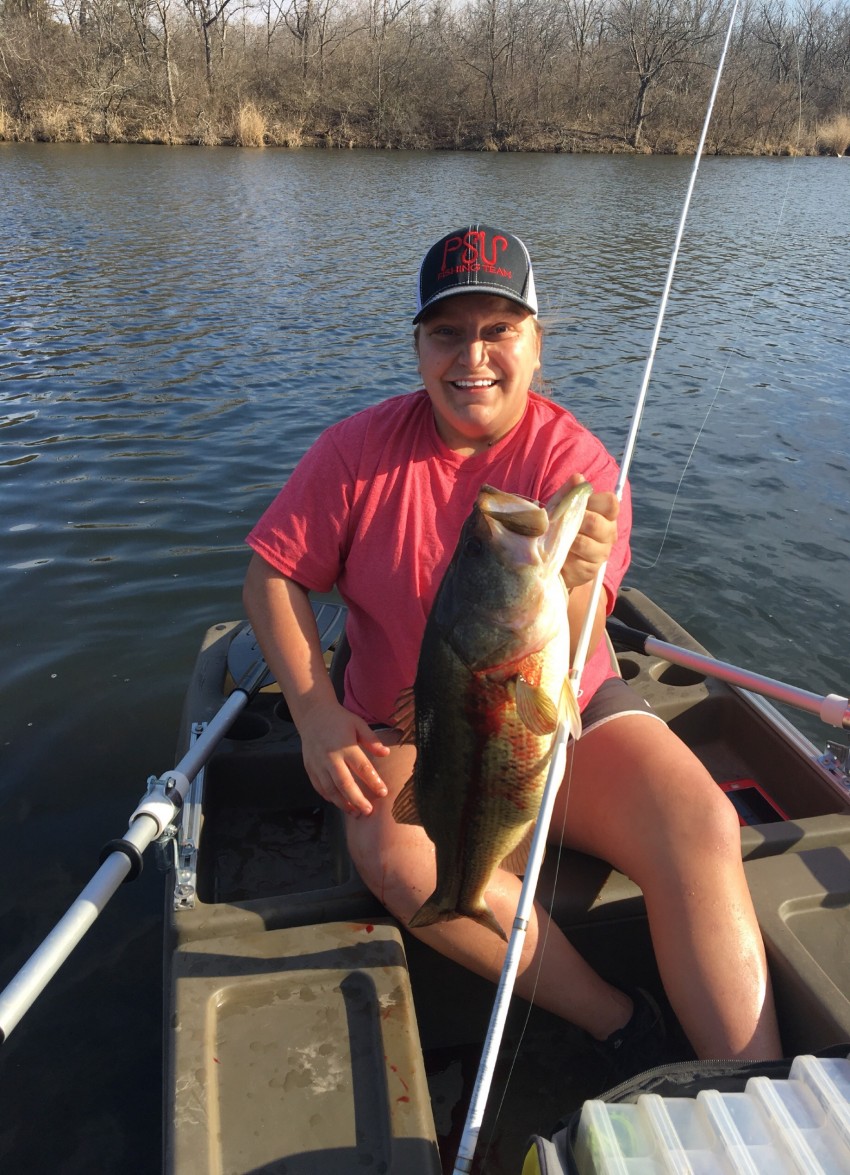 Cowley State Fishing Lake, 13 miles east of Arkansas City along U.S. Highway 166, is made up of 84 acres of water. According to the Kansas Department of Wildlife, Parks and Tourism (KDWPT), it is one of the top-rated state and community lakes in Kansas in terms of densities of four popular fish species.

Kelly is not alone in her passion for fishing. KDWPT Secretary Brad Loveless says the state issued more than 240,000 fishing licenses last year but knows there are an estimated 400,000 anglers who fish in Kansas.

Loveless is an avid fisherman himself and says fishing is a sport that matters to Kansans because of its rich agricultural history.

“Kansas doesn’t have many natural bodies of water but has 9,000 stream miles that are fishable on private land,” Loveless says. “Over time, farmers have constructed farm ponds that are stocked with tremendous fish. KDWPT offers compensation to landowners through a walk-in program, if they will allow the public to fish their watershed or ponds. It’s called the Fishing Impoundments and Stream Habitats (F.I.S.H.) Program and currently, about 1,900 acres of ponds and more than 70 miles of streams on private land are available through this program. Add that to the more than 190,000 acres of community lakes and reservoirs in Kansas and it’s clear we have a lot to be proud of.”

Loveless says private farm ponds are a treasure in Kansas. So much so that KDWPT offers an online and hardcopy Fishing Atlas for folks to locate farm ponds for fishing. The Fishing Atlas shows the location of all public waters, as well as those farm ponds enrolled in the F.I.S.H. program. 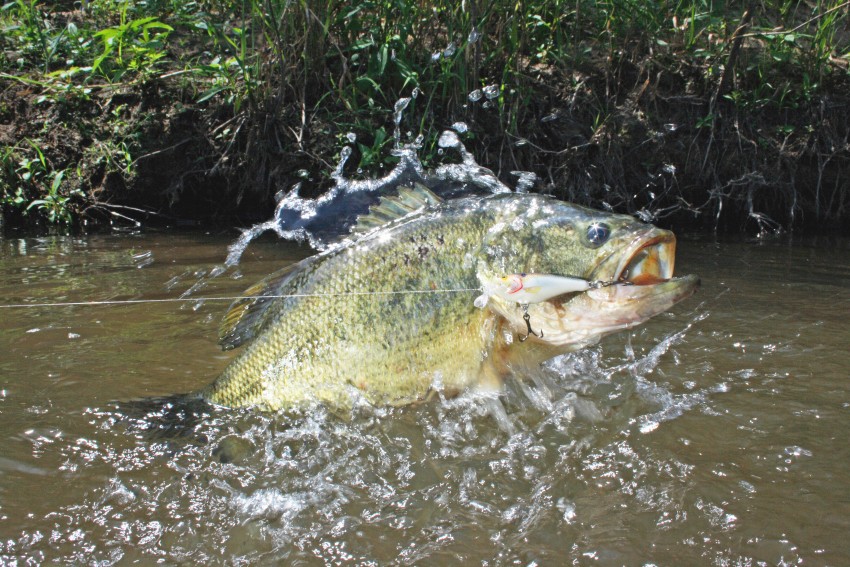 “Whatever’s Biting” categorizes bodies of water by their size and then ranks them by the overall fish densities for the most popular species.

“We work to quantify the number and the health of our fish in Kansas,” Loveless says. “That’s how we make a lot of our management decisions. KDWPT wants to help determine for the angler how much benefit a place is, for example, to help them find the biggest and best walleye, crappie or channel catfish. When we compare to our neighboring states, we have exceptional bodies of water here in Kansas.”

When Kelly wants to use her bass boat to fish she heads to Cowley State Lake. It’s so clear, she says, Kelly can see to the bottom in some spots. In late summer, Kelly can catch anything there, she adds, and the crappie at Cowley State Fishing Lake are huge.

“The biggest bass I’ve caught came from there, about eight and a half pounds,” Kelly says. “Fishing is so relaxing to me and  it’s the great unknown, too. I can go fish all day and catch one right after the other or be out all day and not get a single bite. You never know how big it’s going to be once they bite. And not one cast is the same as the next.”

Kelly says she carries her tackle box and pole everywhere, even during freezing temperatures. The tackle box holds her trade secrets. While she won’t share the details, Kelly is willing to offer that she likes plastic worms or lizards to use in late summer and uses a lure called a Texas rig. She does have a lucky, go-to lure made by a company called Mepps. But its color and size remain a secret known only by her tackle box.

An angler also keeps a collection of rods for strategy, Kelly says. She owns a baitcaster pole, a crappie pole, an open-face reel, a topwater rod, a worm rod and a can-do-it-all rod.

“I like a firm rod that’s not floppy,” Kelly says. “It all depends on the person and how they fish. I tend to set the hook really hard and have a firm grip, so this rod compensates for how hard I set the hook.”

Loveless says anglers fish for fun but if they have a competitive vibe then tournaments exist for them. Tournaments allow anglers to measure themselves against each other. Kansans can find a list of tournaments to compete in online at www.ksoutdoors.com/Fishing/Tournaments, and can join fishing clubs to learn more.

Kelly competed throughout college in tournaments as the president of the Pittsburg State University fishing team. This officer role put her in full gear to gather sponsorships for the club and compete through the southeastern Kansas region.

Recently Kelly joined the Winfield fishing club and hopes to compete in more tournaments in the coming years.

“I could sit there all day and just cast,” she says. “No music, I just listen to the birds chirp and the cattle in the background.”

Loveless says anglers get a spiritual sense of connection with nature around them and that’s why they love it. Being in nature and the solitude fishing provides are what makes it a great sport and hobby.

“I have a five-year-old grandson who loves to fish, even when it’s stupid cold in November,” he says. “‘Just a little while longer,’ I tell him. Fishing is the neatest thing. You can do it by yourself, with your friends or with your grandkids. We like to catch fish but it’s almost a bonus to getting out and seeing the beauty.”

CATCH AND RELEASE – OR TRANSFER

Kelly does make the effort to restock fish on her family’s farm ponds. To transfer them she will put fish in a bucket with an aerator then release them in a different pond. She does this to keep populations up and to balance the varieties of fish.

“If there’s too many in one pond, they won’t grow,” Kelly says. “So, if I’ve been fishing that pond and keep catching the same size fish, I know it’s overpopulated.”

In the early morning summer hours, Kelly helps her family feed cows, then gets her pole to go fishing. She will watch the Farmers Almanac to see if it predicts a good fishing day and if it does, Kelly will stay on the water until noon. She goes in during the hot part of the afternoon but hits the water again as soon as the summer day cools down.

Kelly says she has encountered some criticism of fishing as a hobby or a sport. Recently, she posted a photo of one of her catches on her Instagram account, holding a bass. A person commented, asking the question, “how can you do that to a fish?” Kelly says she immediately responded that she was proud of the bass, took a photo and threw it right back into the pond, unhurt and saw it swim away. But there’s a time where the fish caught provides for her in the form of a healthy meal.

“Some people might not understand that you can catch the same fish over and over and it doesn’t hurt them,” Kelly says. “I always throw the big ones back in the pond. But sometimes, when they come from our farm ponds I do fillet them and fry them. I’ve been able to fillet a fish since I was six years old.”

Loveless says Kelly has it figured out on how to deal with critics. He says he wants people to recognize the value of a fish, to the extent they throw it back to be caught by somebody else.

“The greatest value of a fish in the state of Kansas is to reproduce, for it to be part of an ecosystem and keep things in balance, but we love it when people harvest and have those fish on the table,” he says.

As for this summer, Kelly is looking to meet her immediate goal.

“I want to fish as much as I can this summer, even if it’s just for 30 minutes at a time,” she says. “But I would go anytime, anywhere. I’m always on the lookout for a great pond. And it’s not unusual to have a lure in my purse on a February day.”

If you’re interested in fishing, it is a great opportunity to teach kids about patience, nature and appreciating the work put in to provide for yourself. Visit www.ksoutdoors.com to find your next (or first) fishing hole.