The Kanopolis Drive-In gets a new life while keeping its historic, hometown charm

Each summer weekend, cars line up outside the fenced area just as the sun sets. The metal legs of the movie screen show signs of wear but boast a grandeur size. The red “Kanopolis Drive-In” sign looks as though it’s bursting to tell stories of the good ol’ days. Although the top coat of paint has started to chip, the sign still warmly welcomes guests. It has seen children grow up and watched  the automobile industry evolve. Today, it still stands tall waiting for more memories to be made.

The Kanopolis Drive-In is more than a place to watch movies. Every part of the theater speaks to its 1952 creation. The screen is original. The speaker poles still stand and although the concession stand has gone through updates, each update is done with the theater’s history in mind. It’s as if moviegoers are given the opportunity to step into a simpler world. A world with less hustle and bright lights. A world with more family time and shooting stars.

Each weekend between April and Labor Day weekend, Josh and Amanda Webb, owners of the Kanopolis Drive-In, invite people to experience the movies in a different kind of seat.

The front row is the most popular spot to be, but with 166 parking spots, moviegoers are given the opportunity to find the spot they like best. For Josh, the right corner of the back row is where his memories lie.

“I remember going to see City Slickers with my dad,” Josh says. “There is something special about being under a 70-foot wide screen sitting under the stars with your family.”

Just stepping foot on the theater’s property brings the nostalgia back for Webb.

“You differentiate in your mind a venue like this more than you do an indoor theater,” Josh says.

When Josh and Amanda were ready to start a family, they knew Kanopolis was where they would put down roots.

“I grew up on the exact opposite corner of the movie theater in Kanopolis,” Josh says.

The move back to his hometown happened in 2006, the same year the drive-in movie theater temporarily closed for the first time since opening in 1952. After the temporary close turned into a years-long close, Josh and Amanda began conversations with Irene and Larry Pacey, the original owners, about purchasing the theater.

At the time, they were pregnant with their first child, Brooke.

“Josh didn’t want it to sit. He had grown up here. And he wanted kids to be able to come here and hang out like he did when he was a kid,” Amanda says.

With each conversation, Amanda too became more interested in the idea of buying a movie theater. The theater, however, would not replace their day jobs; they were buying a new hobby — and a very expensive hobby at that. It was no small commitment for either the Webbs or the Paceys.

“It was like being vetted,” Josh says. “The Paceys didn’t want it to change a lot, to close or to go away. They wanted to be sure it stayed open and operating before Irene would accept a sale.”

With the help of loans from the Smoky Hill Development Corporation and the Rolling Hills Electric Cooperative, and of course approval of the Paceys, the Webbs were able to purchase the theater in 2010. When Brooke was two, they showed their first movie, Rango. They ran their first full season in 2011.

“There are so many things you have to be able to do. You have to be able to reprogram the server and start it from scratch to get the digital movie up on the screen. The next night the toilet is overflowing and the valves won't flush so you’re replacing toilet valves and hoping you can get the women’s restroom back open. And after that, you are picking up trash and talking to the film booker about the next week’s shows, and then the fuse on the popcorn machine blows so you become an electrician for a couple hours.”

Even facing many challenges, the Webbs find time to implement new improvements that alleviate some of the stress. After two years of using a 35-millimeter projector, the Webbs took a leap and transitioned to a digital projector. The decision was not a cheap one — for a projector the size of a double oven, they paid more than they did for the land the theater sits on.

They had successfully operated the theater for two years and had the data to prove to lenders they could responsibly pay back a loan. The digital projector is automated, alleviates strenuous work and hasn’t gone blank once during a movie (unlike the frailty of the 35-mm projector).

The Webbs drove all the way to Colorado Springs to pick up a vintage popcorn machine. Josh had hunted high and low for the right fit.

“We probably could have gone with a new one,” Josh says. “But it just wouldn’t have been as nostalgic. Or as cool.” 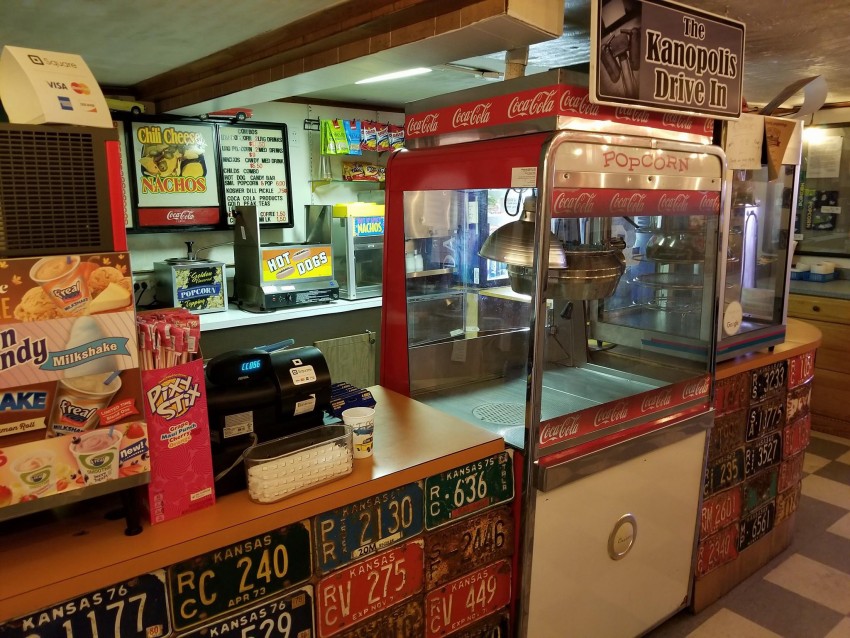 The Webbs intend to keep the previous style of the theater in tow. Speaker poles still mark each parking spot, but today, the movie audio can be heard at 101.1 FM on the radio. The sound syncs with the movie flawlessly and the quality is higher.

When Josh sees kids playing on the grass or a son with his dad for a guy’s night, he is reminded why all the late nights, repairs and hectic schedule are worth it.

Amanda and their two kids like the parking spot at the end of the first row — a front seat to the grass field under the screen. Brooke and Remy, the Webbs’ second child, break out the Frisbee disc, tents, blankets, chairs, toys and footballs.

“They would come out here every day if I would let them,” Amanda says. “It’s hard to pick a favorite part.”

Every night the theater is open, they have a double feature. The movies are announced at the beginning of each week on their Facebook page at www.facebook.com/kanopolis.in (where they have more than 19,000 followers).

When the gate opens at the beginning of the night, Josh sits in the box office ready to welcome moviegoers, give directions and is armed with a stack of two-dollar bills. The stack of two dollar bills are convenient for change, and Josh hopes when people see that two-dollar bill in their wallet in the future, they think about the evening they had at the Kanopolis Drive-In. 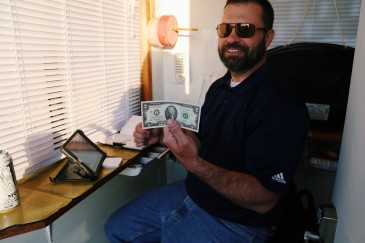 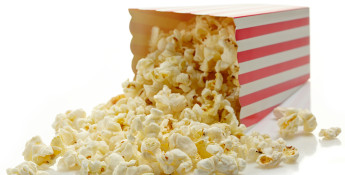