Did you know that you can plant turnips from an airplane?

According to Ken Bixenman, owner of Great Plains Aerial Spraying of Colby, planting turnip seeds is one of the many uses of his specially designed airplanes. Aerial sprayers – also known as crop dusters – are used to plant rice, feed fish, fight fires, clean up oil spills and protect crops.

“Our planes are designed to spray liquid products, but also have hoppers that hold seeds,” Ken says. “When the corn is growing in the fall, we spread turnip seeds into the fields. Once the corn is cut, the cattle eat the turnip leaves and the turnips are left in the soil. Farmers use these cover crops to enrich the soil.”

Rather than being referred to as crop dusters, the National Agricultural Aviation Association prefers the term crop doctors. Like doctors, pilots apply the right treatments at the right time to ensure healthy crop growth. Protecting a crop is critical to ensure safe food, fiber and bio-fuel for the world. Aerial applications can increase crop production by 30 to 40 percent per acre.

Ken began his love affair with airplanes as a child on the family farm near Grinnell, 30 miles from Colby. He attended Colby Community College for their flight program.

“When I was little, I chased every airplane I saw and crop doctors were the most visible. I started flying in college then, when I turned 21, the owners wanted to sell this business to me. I bought it and have been flying ever since.” 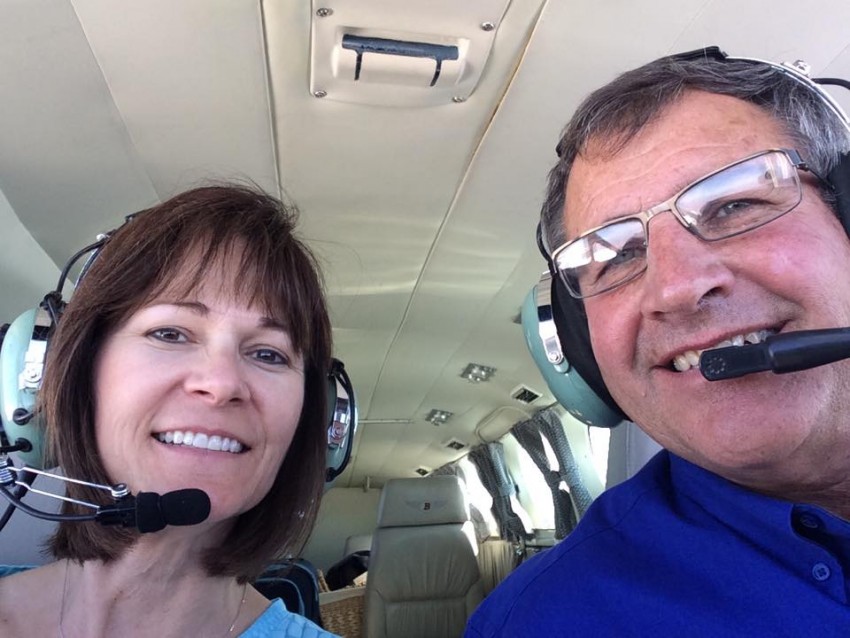 Ken and his wife, Colleen, have five children. One of their sons, Jared, flies for Ken but is also a commercial pilot for a private fleet. For more than 40 years, Ken has flown over the fields within a 30-60-mile range of Colby.

“A farmer calls for us to spray,” Ken explains. “He gives the legal coordinates then we put it into our GPS systems and fly right to it. But when I started flying, all we had was a paper map and someone on the ground to guide us once we arrived.”

These specially designed airplanes have a 50 foot wing span, a 1,500-horsepower engine and fly about 20 feet above the ground when spraying. Most single engine airplanes have 200 horsepower engines. Flying an aerial sprayer compared to a small airplane is the difference between driving a Lamborghini and a Prius. 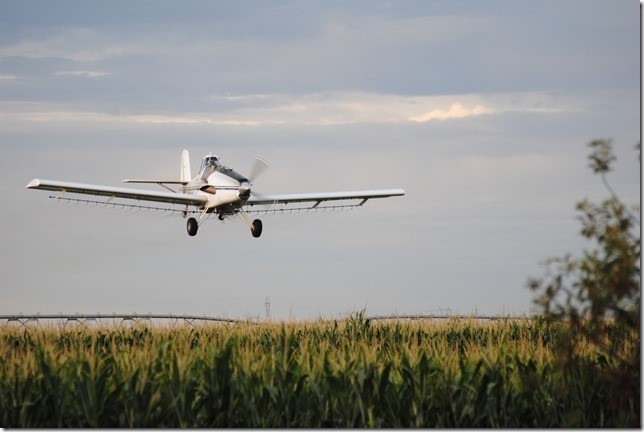 The challenge, in his early days, was to know what part of the field had been covered.

“We had people in vehicles on the ground with a chalk mark on their tires. They counted the number of revolutions needed to match my wing span then moved the vehicle forward each time I passed.”

Another method of marking a field was a flag a pilot dislodged from the wing with each new pass.

“The first GPS unit came out in 1994 and we’ve been using it ever since,” Ken says. “We load our coordinates and head to the field. We also have an app for our phones that indicates where all of our pilots are at any given moment.”

Aerial sprayers provide a variety of crop protection services for both conventional and organic farming. Often, the aerial application of various products is more effective than land application and does not require the field to be dry. In addition, airplane and helicopter sprayers reach areas inaccessible by land, such as fertilizing stands of timber.

“Farmers are always battling weeds and insects,” Ken says. “A fungus like stripe rust in wheat can destroy an entire crop but if you wait until you see it, it’s too late to spray. We’re kind of like the mortician; you want us around when you need us, but you don’t really want to have to need us.

“I’ve seen the devastating effects of insects like green bugs that can decimate an entire wheat crop in a short period of time. However, scientists have bred wheat so it is not as susceptible to green bugs.”

During his career, Ken has witnessed many scientific improvements of the chemicals he applies. The aerial application industry is highly regulated with oversight from the Environmental Protection Agency (EPA); Department of Homeland Security (DHS); Federal Aviation Administration (FAA); Department of Transportation (DOT); and individual state departments of agriculture, ecology and environment. Only one in 20,000 chemicals is approved for use and only after a testing period of eight to 10 years at a cost of up to $200 million.

“We’re cautious not to fly directly over a city,” Ken says. “It used to upset people when we flew over a city, but when the West Nile Virus came along, they asked us to spray the mosquitoes.”

Like those just mentioned, most of us are OK with the safe use of chemicals if our lives are at stake.

Farmers, who eat the same food we do, understand lives are at stake because they share a deep-rooted passion to feed a world with 725 million people who go hungry each day. They see the future population of 9 billion people in 35 years and, to keep that world from starving, they must up their game to produce 75 percent more. There are two primary ways they can produce more crops on the same piece of land: the use of safe chemical inputs and genetically modifying crops to resist insects, diseases and use less water.

To the casual observer driving past golden wheat waving in the breeze, it is difficult to understand the battles farmers endure. Mother Nature, who provides fertile soil, rain and sunshine, also produces storms, insects and diseases. Aerial sprayers are an integral part of that battle.

It is reassuring to know that the most inventive, scientific and entrepreneurial minds in America collaborate to grow more safe, nutritious and healthy food to feed a hungry world.

The next time you see an airplane flying barely above the top of outstretched corn stalks, remember that it’s just another crop doctor making another house call.