If you ask Christy Springer whether she refers to them as pigs or hogs, her answer is simple: bacon.

“I’m writing a cookbook: I Married a Hog Farmer; Now What the Heck do I do With all This Pork?” Christy says. “I never dreamed I would decorate my entire home with tractors and pigs, but they’re everywhere. I even have a statue of a pig that greets you at my door.” 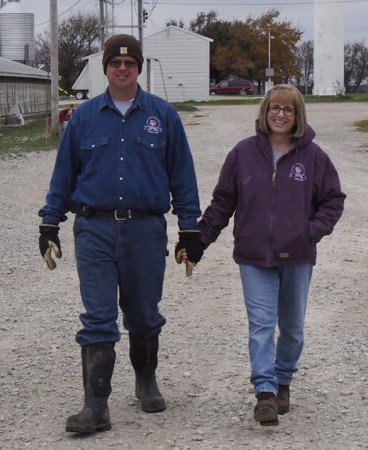 Christy met her husband, Michael, on a blind date.

“We’re still friends with the people who set us up, so it must have been a good thing,” Christy jokes. “He was a hog farmer and I knew nothing about farming, so we had plenty to talk about while dating.”

Christy, a native of Eureka, moved away after college but returned to Kansas to be near family. Michael grew up on his family’s farm near Sycamore.

“I knew when I was 5 years old that I wanted to be a farmer like my Dad and Grandpa,” Michael says. “Dad had a pair of brown duck Carhart coveralls but the only color in my size was green. I wasn’t happy until I grew big enough to have a pair just like Dad’s.”

Michael and Christy now live on their own farm south of Fredonia with their two young sons, Mason, 11, and Cooper, 8.

“I started raising bucket calves when I was 12 and that paid my way through college,” Michael says. “Our sons are now raising their own.”

“I named mine, Justin Beefer,” Mason jokes. “He kind of looks like Justin Bieber.”

“I have one, too,” Cooper chimes in. “I named mine Taylor Steak, but it doesn’t look anything like Taylor Swift.”

Although the farm has several employees, Michael and Christy have daily chores for their sons.

“We want our boys to stay on the farm,” Michael says. “But the most important lessons we can teach them are a strong work ethic and personal responsibility. If they learn that, they will be successful anywhere.”

“I like to wash out the barns and Dad is teaching me to sort hogs,” Mason says. “But my favorite part is my Papa teaching me how to drive the tractor.”

“I like to help, too,” Cooper says. “My favorite part is helping with the Ham-Tram.”

Michael and Christy’s farm is part of Springer Family Foods, which they own along with his parents, Chuck and Debbie, grandparents, Lee and Dorothy and uncle and aunt, Dale and Judy. Their farm has nurseries for small pigs as well as finishing barns for market hogs.

Although the farm work can be all consuming, Michael and Christy keep their family engaged in the community.

“We are 4-H leaders because we can do it as a family,” Christy says. “It would be easy to let the work of the farm keep us at home, but we stay active in our community.”

Christy represents the 3rd District on the Kansas Farm Bureau Women’s Leadership Committee and serves on the Wilson County Farm Bureau board. She searches for creative ways to tell their story of farming to the public.

“The Kansas Pork Association does virtual classrooms on our farm and we sit with the baby pigs and talk to the kids about raising hogs,” Christy says. “The kids ask questions while the little pigs are running around in the pen and even climb on us sometimes. Little pigs are like little kids; as soon as the class is over, they all take a nap.”

Michael serves on boards with the Kansas Department of Agriculture and is past-president of the Kansas Pork Association.

“I take every chance I can to tell people about what we do because there is so much misinformation out there,” Michael says. “People ask about humane care for the animals, biosecurity, use of antibiotics and the environment.

“It is important we provide pigs with adequate space, water and feed,” Michael says. “Optimizing the pig’s welfare is not only the right thing to do for the pig, but something that always improves overall productivity and profitability for the business.”

“Even when we load them into the double-decker trailer for market, we give them the choice of window or aisle seating,” Christy jokes. 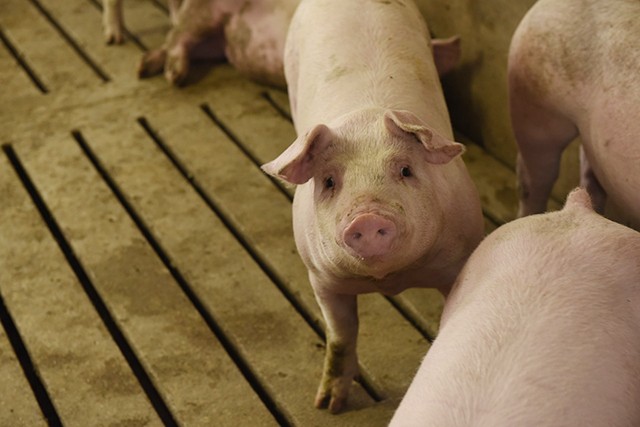 “Our pigs have their own dietitians. Swine nutritionists at K-State developed nine different diets for our pigs depending on their stage of growth. They are eating the best food available.”

In addition to animal welfare, biosecurity is an area of intense concentration.

“Pigs are highly susceptible to diseases so we are extremely cautious in protecting our farms,” Michael says. “After our trucks deliver the hogs to market, they (the trailers) are washed then brought back to our Bake Barn where we bake the trailer at 160 degrees to kill any contaminants.

“When it comes to antibiotics, we approach our pigs the same way we do our children,” Michael says. “If they (the pigs) are sick, we work with our veterinarian and she prescribes an antibiotic. Just how we’d take our children to the doctor to be prescribed with necessary medication. Most of the time we isolate our sick pigs into hospital pens so they can recover faster; it’s all about providing each individual pig the best care possible.”

Another concern raised by the public is environmental impact.

“I tell people we live on the same land, eat the same food and drink the same water as they do,” Michael says. “We want to make sure the land is good for future generations so we have to take good care of it.” 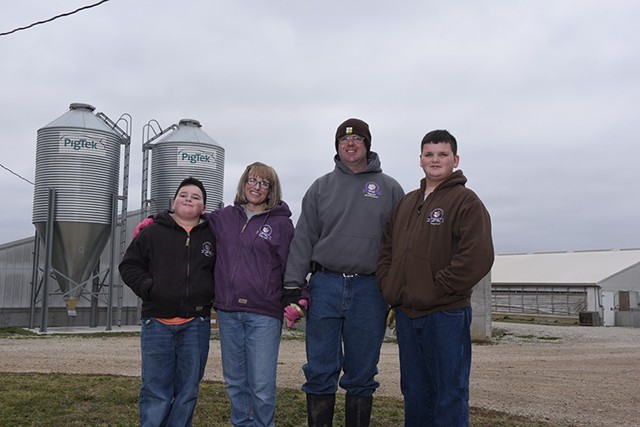 Michael and Christy reflect the current generation of young farmers that are savvy, educated and passionate entrepreneurs who produce the highest quality product to consumers. They preserve the legacy of their previous generation while focusing on long-term sustainability.

They want to make sure their children and grandchildren wear brown duck Carharts and decorate their homes with tractors and pigs.