Every spring Symphony in the Flint Hills celebrates the history, ecology and culture of the Tallgrass Prairie. This year, the event will be hosted June 10 in Geary County. If you haven't participated before, enjoy this piece from Rick McNary who wrote about his 2016 experience.

Once a year, in the Flint Hills of Kansas, the coyotes grow silent, the crickets quit chirping, the pheasants stop clucking and the cowboys finish tending cattle early to listen to a different kind of music on the prairie. On this one night, the Symphony In the Flint Hills graces the prairie on a stage framed against a cerulean blue sky sprinkled with cotton-ball clouds.

The symphony is a reminder that the prairie makes its own music. Throw a blanket between the wildflowers then settle in to listen to the voices that grew silent while you were looking for a place to settle. They know you’re there, they saw you coming long before you chose that spot. That meadowlark perched on the fence warbled your presence to others as you drove past. That killdeer zigzagging in the graveled road tried to lure you away from her nests of camouflaged eggs in the rocks. That coyote trotting off in the distance signaled your arrival. Be patient; they’ll sing to you again.

The symphony invites you to listen to the music of the past. Sit quietly and listen to a million bison hooves thunder like tympani drums across the prairie. Listen to the click-click-click-click of a Native American man flint napping - teaching his son to make arrowheads from shards of flint. You might just hear Zebulon Pike’s saddle creak as he peers out over the hills and gave this land its name: the flinty hills. Behind him, wagonload after wagonload of pioneers headed west, young man, through head-high grasses to new beginnings.

Occasionally, the sweet melody is interrupted by mournful sounds of angry clashes over the land between  pioneers and Native Americans or the grief-stricken funeral dirge of a mother who lost her sons to the Civil War in Bloody Kansas.

The pounding of a hammer against a metal survey rod setting the corners of a 160 acre plot still rings from the Homestead Act of 1864 that gave land to any pioneer brave enough to carve a life from the soil. Those who claimed the ground fought thru the arctic winters that pile snow as high as a barn, spring storms that turn rivers into furious torrents and blazing summers that create cracks in the ground large enough to swallow small rodents.

A different rhythmic hammer nails iron spikes on railroad tracks carrying puffing steam engines and eastern money to the undulating prairies. Soon after, you can hear the whip and whistle of cowboys driving large herds of cattle from Texas to Abilene to load in boxcars destined for eastern markets. This prairie gave birth to the American Cowboy who prefers wide open prairies to an office, a saddle to an easy chair and leathered skin on muscled frames grown tough by the hard work of an honest living.

The symphony invites people to listen to the music of the present. Each spring the dried prairie grasses crackle when they are set ablaze for the annual burn. Lines of fire illuminate the night sky and lay like red lace on shapely hills and valleys. Soon after, the hills explode with sweet grasses and thousands of cattle mooing in the pastures as they dine on nature’s finest bounty.

In the valleys, spring-fed streams ripple over limestone slabs and trickle in pools teeming with sun perch and crawdads. Bullfrogs drum out deep base notes while cicadas whine like the siren of an ambulance.

The tall grasses of the prairie, some as high as your head, make their own music. Sometimes, a gentle breeze whispers the prairie awake to the quail singing bob-white, bob-white. At other times, a fierce south wind whips the grasses like a thousand furious violin strings in crescendo. 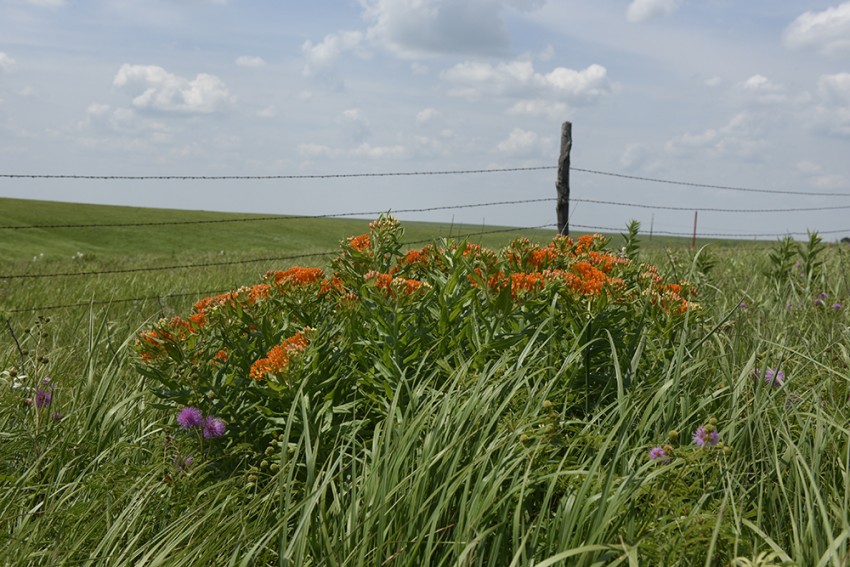 Listen to the oak tree, with roots as deep as her limbs that reach to the sky, as she whispers a lullaby in her leaves. Her acorns plop on the ground as scurrying squirrels whisk her seeds away for the winter. Close your eyes and see if you can tell the difference between the music of the rustling leaves of the sycamore and the cottonwood.

The slow whoop-whoop-whoop of the giant wind generators stationed like soldiers at attention mix with the whir of the grasshopper-like oil pumps reaching thousands of feet into the ground. They speak about the creativity of people looking for alternative sources for energy.

Amidst the prairie sounds are the lyrics of  poets and writers who wrangle words onto a page like a cowboy bulldogging a steer. The troubadour harmonizes with the meadowlark in ballads on the strings of an old guitar; their words weave meaning into life. 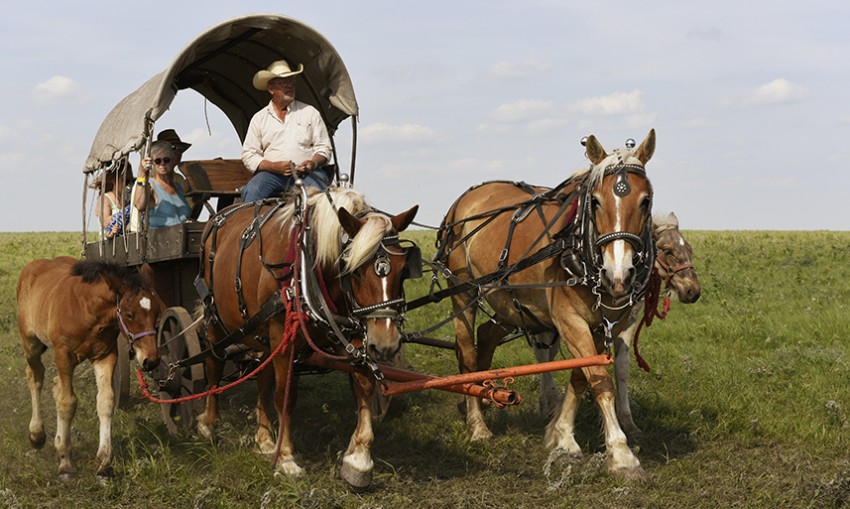 The symphony invites people to listen to the music of the prairie’s future.  Eavesdrop on the conversations in the dining room of one generation passing the family farm or ranch to the next. Old-timers tell stories that impart the principles of hard work, deep faith, love of family, love for the land and perseverance.

The music of the prairie’s future sounds much like the music of the past and present as people work diligently to preserve her heritage and protect her pristine resources. The future sounds like cattle grazing on the hillsides, the wind whistling through the tall grasses and bees buzzing around sunflowers.

The Symphony In the Flint Hills, one day a year, graces the prairie with humanity’s best music. However, once everyone leaves, the prairie resumes creating her own music.

Come, listen to the music of our prairie.

Note: The best place for the public to enjoy our prairie is at the Tallgrass Prairie National Preserve, north of Strong City along Scenic By-Way, Highway 177.